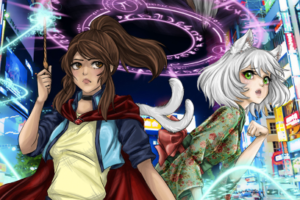 Become a powerful wizard or witch in modern day Japan! Tokyo Wizard is a 144,000 word tale in which you’ll learn the power of magic and the consequences of it. Become one with Shinto animal spirit magic, learn powerful battle spells, or choose the path of necromancy and command an undead army! The game is entirely text-based–without graphics or sound effects, where your choices control entirely the outcome of the game. Can you free Tokyo from the evil menace facing it, or will you be consumed by dark magic?

Leave a Response to Adrao