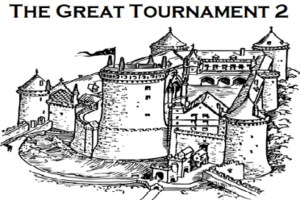 In this sequel to The Great Tournament, continue your quest to defend the kingdom of Magincia. Play as a Knight, Lord, or Prince in this medieval fantasy where every choice you make affects the story. Lead armies in battle against powerful foes or use diplomacy to resolve conflicts. It’s 25% off until February 16th!

The Great Tournament 2 is a 300,000 word interactive low fantasy novel by Philip Kempton, where your choices control the story. It’s entirely text-based—without graphics or sound effects—and fueled by the vast, unstoppable power of your imagination.

• Character generation and random events ensures no one game is the same.
• Play as a devoted knight, honorable lord, or ruthless tyrant.
• Multiple storylines with over a dozen different endings.
• Use diplomacy or war to resolve global conflicts.
• Raise and train an army to defend the kingdom.
• Conqueror territories and expand your kingdom.
• Manage village and kingdom finances.
• Fight waves of barbarian armies in Survival Mode.

Philip Kempton developed this game using ChoiceScript, a simple programming language for writing multiple-choice interactive novels like these. Writing games with ChoiceScript is easy and fun, even for authors with no programming experience. Write your own game and Hosted Games will publish it for you, giving you a share of the revenue your game produces.

Leave a Response to Tyler