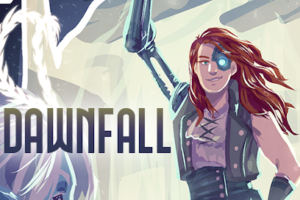 Find true love and family with a pirate crew at the ends of the universe, where aliens, ghosts, and portals open the space between worlds…and your heart. You are a Navigator, one who creates and guards portals from one dimension to another, wary of the liminal sea between them.

Your universe is made of two worlds: one contains the magic-infused world of Zephyria, and the other, the dystopian space station Eclipse. The worlds are balanced, until one day, an explosive disaster, a deadly energy storm, and an infamous pirate—the Ghost Queen—upend your life and plunge you into a race to save both worlds.

Dawnfall has frankly an insanely wonderful setting for a romance game. Tell me about the aliens, the pirates, the ghosts, and the alien-pirate-ghosts.

Hi there! I’m so glad you think this sounds fun! Yeah, Dawnfall is weird as heck, and that’s one of the things I love about this story. It’s weird in a way I don’t think we’ve seen much of before. I really just tried to put in everything I find fun or interesting, and that I’ve always wanted to write. Dawnfall started out as a total brain-candy project, and runs on pure Rule of Cool. Pirates? Yes. Magic? Yes. A slice of cyberpunk? Hell yes. Eerie ghosts and faerie-tale influences and memory-sharing potions? Giant bird people? The power of rock n’roll? Yes, yes, yes.

And also everybody’s dateable, and in a couple cases, dating each other. We weave a tangled web, but I think it’s a pretty badass and spectacular web.

You seem to really neatly straddle the genre fence here with a romance and sci-fi/fantasy. What was challenging about cramming all of that into one game?

Thank you so much for saying that. I’ve always adored SFF, and there’s so much in this genre-collection, so many extremes and concepts and contrasting colors, that I couldn’t limit myself to picking just one to play with. This weird game-book is kind of a love letter to fantasy and science fiction and haunted house stories and cyberpunk adventures—I thought a lot about the Disney movie Treasure Planet for its genre-blending beauty, and the Bioware game Mass Effect for its array of fascinating, multidimensional alien cuties to interact with and date… and then turned it up to eleven.

I guess you’d expect the challenge to be in making it all fit together/be “believable,” but I kind of threw that out the window. I don’t expect anyone to find it ‘realistic’ (setting-wise anyway; I tried to make every character ring true of course), and I don’t really care if someone thinks it’s silly, or doesn’t take it seriously. It is silly in a lot of ways. DAWNFALL is a giant ridiculous queer space magic pirate adventure, and the only goal is fun. If you have fun, I’ve done my job, and there should be something fun in here for everyone. 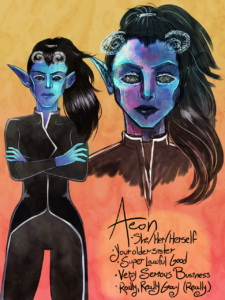 Did you have a favorite NPC you enjoyed writing most?

Honestly I love them all so much in different ways, and I know them so well by now it’s really second nature. Their voices come so easily and they’re all so much fun. The Queen’s swagger is awesome though, and her mental voice/mannerisms probably come through especially clearly. I love Zenith’s vulnerable moments when xie lets xir guard down and lets go of the need to entertain or please. I love Averis’s journey and growth from cute wibbly nerd to a confident swashbuckler (who is also still a cute wibbly nerd). I love how deeply Oz feels, how strongly he loves and remembers and honors memory, and how unafraid he is to show softness and warmth. And I love a certain spoilery ghost-babe and how they’re so full of joy at the beauty of life.

I do want to give special mention to Aeon, though. This is a story about connection, and I wanted to show that sibling bonds are every bit as important and strong as romantic or any other. I also wanted to show a complex, multidimensional antagonist figure who holds heartbreaking secrets along with authority, and is genuinely trying to do what she thinks is the best thing, and wants what’s best for you, the PC, even if you might not always agree. Her balance between being so emotionally guarded and determined and unyielding, while hopefully being extremely easy to read and tell what she wants and fears and loves—spoiler: you; she loves you!—was a challenge I hope I pull off.

…Also I enjoy any time Vyranix gets his pompous feathered ass handed to him. I think we all know a Vyranix, or at least of one, and it’s always fun to take them down, even in fantasy. 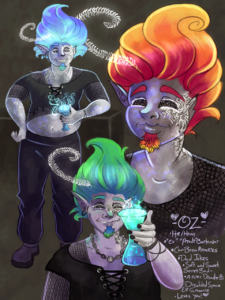 Who would you be romancing as a player?

I’m gonna say “everyone,” and here it won’t actually be cheating, because you can romance everyone! At once! In varying degrees/relationship dynamics and attractions. You don’t see a lot of polyamory-friendly games or books or anything really, and this is an incredibly important thing for me. The second I got the idea for Dawnfall I knew it had to let players romance anyone they wanted and show polyamory in a realistic, healthy light. I’m also a-spec (asexual and aromantic), and having not just good representation but being actively included and welcomed and celebrated in fiction is so huge too.

Dawnfall is a romance of course, being part of Heart’s Choice, but one of the single most vital elements for me is making it inclusive for aromantic and asexual players and player-characters. Essentially, I wanted to write a romance that didn’t penalize players for not experiencing the attractions the way we’re otherwise expected or required—and I’m so grateful that my amazing editors and community not only accepted but supported everything I was trying to do here. (It’s so refreshing not to have to fight for inclusion and freedom. It shouldn’t be, but it is.)

And that’s where the concept of “Heart-Stars” and “Same-Feathers” came from. I’ve never seen anything honor queerplatonic relationships like I’m trying to do here, and I want everyone, of every sexuality and attraction, to feel like they have a place here and can experience this adventure without limits. And I wanted to show that it’s a very normal thing, hence this being the same for the human characters as well as alien. (One of the nonbinary characters being human is also no mistake. I love me some wild alien genders, but there are tons of awesome nonbinary humans too!)

…That being said, I think I gave Averis most of my anxiety-issues, and would really just like to curl up with Oz and watch The Great British Bake-Off. That sounds like a perfect night in my books. 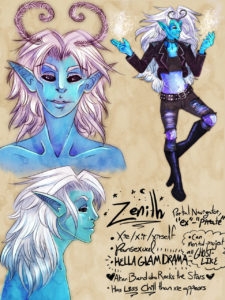 What were some of the things you found surprising about the game-writing process?

Coding was definitely the biggest learning curve. I’d never coded anything before in my life, and it’s such a new skillset to learn, entirely different from any kind of writing I’ve ever done. Sometimes it felt rewriting my brain, which did not at all do this intuitively—and also sometimes like I bit off much more than I could chew (first game ever being not only a huge piece of interactive fiction, but a polyamorous romance with aro and ace possibilities, and so many more variables than expected!), but it’s been worth it. Entirely. If my writing makes anyone feel seen and accepted and invited to have fun as they are, it’s worth every bit of struggle.

Also, oddly, interactive fiction is in some ways easier for me than writing a plain old book! Probably because I love AUs so much, and every choice in a game is like writing a tiny AU of the story, so I get to do the same scenes several different ways. My ADHD-brain finds something about this extremely satisfying, most likely because it somehow feels more like multitasking! Several stories in one, and if I like two ideas, I don’t have to pick just one to write!

Honestly though, I think the most surprising part is just being done, and…that I could do this at all. It was so huge, and took so long, and I learned so much, and every day I’m just kind of going “who the hell am I?” about doing all of this. I’m proud of it. I did a cool thing. And trying to get better at saying that. 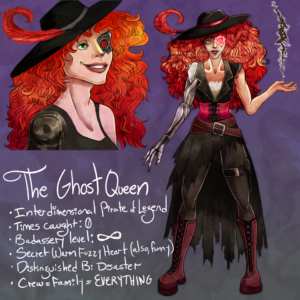 And, what are you working on now?

I always have about 8 active projects going at once (which shouldn’t come as a surprise after last question!), but my next interactive fiction game is with Tales/Fable Labs! It’s shaping up to be a Dawnfall-sized project, but a little faster-moving and action-y.

It’s called Every Beat Belongs To You, and it’s a romantic thriller that feels like Twin Peaks meets Mr. Robot, with a smattering of Repo: The Genetic Opera. A creepy Pacific Northwest town with a secret (and a rash of ritualized murders), a super-slick medical research company whose flagship product is a 100% perfect synthetic heart, a mysterious new-age group, and a sister who went missing just before discovering how it’s all connected. Also five simultaneously-dateable (including ace and aro ships!) cuties of varying genders! Who will you trust with your heart?

I’m very excited about Everybeat, which should be just as queer, polyam, exciting, and weird as all my stuff! Aside from that, I’m working on Stake Sauce Book 2, its companion f/f vampire series Death Masquerade, and Chameleon Moon Book 3. I’m not always working…sometimes there are videogames, and sleep. But I really hope to have a lot more fun things to share soon!

Oh, and depending on how this weird, fun thing goes, I do have some ideas for prequel Dawnfall stories; maybe games, maybe books, but the ideas are there. The world—worlds, really—is so huge, and I’m not done playing in it yet! I also have some character art drawn, and I want to do a lot more of them. It’s another way to show love.

So thank you so much! I really hope Dawnfall is as fun to everyone to read/play as it was for me to write. I can’t wait to share it with you!