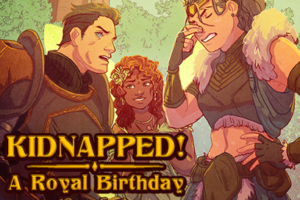 We’re proud to announce that Kidnapped! A Royal Birthday, the latest in our popular “Choice of Games” line of multiple-choice interactive-fiction games, is now available for Steam, Android, and on iOS in the “Choice of Games” app.

Escape your captors…and endure your rescuers, but don’t be late to the ball! When you are kidnapped, you must take charge of your rescue, and reclaim your rightful throne.

Kidnapped! A Royal Birthday is a 158,000-word interactive comedy by Charles Battersby, where your choices control the story. It’s entirely text-based, without graphics or sound effects, and fueled by the vast, unstoppable power of your imagination.

Conspirators have imprisoned you in a tower, and are plotting to usurp your throne. And it’s your birthday! Take command of the inept but well-intended crew sent to rescue you from your tower–a brazen knight, a snarky amazon, a cursed enchantress, and a humble peasant. Work together to escape your captors, outwitting your foes to make it back to the castle and regain your power as royal Heir.

But first: fight the three-headed chimera, the two-eyed biclops, and a horde of insatiable gnomes! (They’re surprisingly dangerous after a few drinks.) Wield swords, magic, or fight with your wits and grace. If all else fails, pummel your enemies with a chamberpot tied to a stick.

• Play as male, female, or nonbinary, gay, straight, bisexual, or asexual
• Act like a damsel in distress (or an imperiled person) and let your rescuers do the work, or grab a sword and fight your own battles.
• Unravel the conspiracy behind your abduction and thwart your scheming siblings.
• Side with the aristocrats, or join a peasant rebellion.
• Gain stature to prove that you are the one true Heir.
• Harness fairy magic to bewilder and defeat your foes!
• Disguise yourself as an Elder Vampire, stare down a giant, and take a nap in a glass coffin!
• Find love with any of your rescuers…or marry a goblin. (You know you’re curious.)
• Bring peace to the kingdom, or revel in the chaos of civil war.

We hope you enjoy playing Kidnapped! A Royal Birthday. We encourage you to tell your friends about it, and recommend the game on Facebook, Twitter, Tumblr, and other sites. Don’t forget: our initial download rate determines our ranking on the App Store. The more times you download in the first week, the better our games will rank.

Leave a Response to And interview with me about my new game! – Charles Battersby