An Odyssey: Echoes of War

"An Odyssey: Echoes of War" is Copyright 2019 Natalia Theodoridou. All rights reserved. 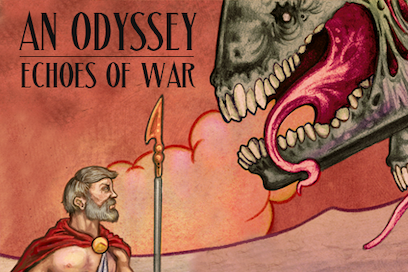 Natalia Theodoridou has published over a hundred short stories, most of them dark and queer, in magazines such as Clarkesworld, Strange Horizons, Uncanny, Beneath Ceaseless Skies, Nightmare, and F&SF, among others. He won the 2018 World Fantasy Award for Short Fiction and was a finalist for the Nebula Award for Game Writing with his first Choice of Games project, Rent-a-Vice. Natalia holds a PhD in Media from the School of Oriental and African Studies, University of London, and is a Clarion West graduate. Originally from Greece, with roots in Russia, Georgia, and Turkey, he now splits his time between his hometown and the UK.

Natalia Theodoridou is a queer writer and editor, the winner of the 2018 World Fantasy Award for Short Fiction, and a Clarion West graduate. Natalia's stories have appeared in Clarkesworld, Strange Horizons, Uncanny, Beneath Ceaseless Skies, Nightmare, and elsewhere. Rent-a-Vice, Natalia's first project with Choice of Games, was a finalist for the 2018 Nebula Award for Game Writing.