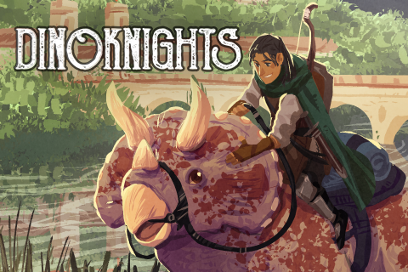 SAN FRANCISCO--August 23, 2018: Choice of Games announced today that "DinoKnights," the latest in their popular line of multiple-choice interactive-fiction games, is now available on Steam, iOS, and Android. It's 40% off until August 30th.

Once a humble farmer's child, you've been accepted into Queen Isobel's Rangers: brave knights who patrol the kingdom of Pascalia on scaly beasts. But just as you receive your own dino and begin your career as a knight-ranger, you discover evil forces are converging to destroy the Queen, and Pascalia itself.

"DinoKnights" is a 177,000-word interactive fantasy novel by K.T. Bryski, where your choices control the story. It's entirely text-based--without graphics or sound effects--and fueled by the vast, unstoppable power of your imagination.

Enemies and terrifying foes surround you: but whom should you fear most? The Dread Wizard Sargossa, raising an army of un-dead dragons, or an enemy much closer to the court--the Queen's own sister, Ermessen? And what about your burgeoning talent for magic? Will you hone your powers to save your village and fight Sargossa? With a dinosaur at your side and sword in hand--the realm's fate rests on you!

Evil is waking, and Pascalia needs you. Will you and your dinosaur answer the call?

KT Bryski is a Canadian author and playwright. Her short fiction has appeared in Daily Science Fiction, Strange Horizons, Apex, and is forthcoming from Lightspeed. Her audio dramas Six Stories, Told at Night and Coxwood History Fun Park are available wherever fine podcasts are found. Select playwriting credits include Six Stories, Told at Night, A Canticle of Light, and East o’ the Sun and West o’ the Moon. KT is a Parsec winner, Sunburst finalist, and Stonecoast MFA alum. She lives in Toronto with her derptacular cat. Visit her at www.ktbryski.com.