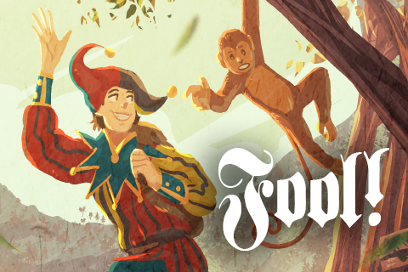 Fool! -- Jest your way from obscurity to royal acclaim!

SAN FRANCISCO--May 23, 2019: Choice of Games announced today that "Fool!," the latest in their popular line of multiple-choice interactive-fiction games, is now available on Steam, iOS, and Android. It's 30% off until May 30th.

Jest your way from obscurity to royal acclaim as the King's pet, beloved by all! As a talented young court fool with dreams of fame, scrabble with other young jesters to secure prestigious positions in the courts of Brenton's nobility. In a royal court humming with intrigue, keep them smiling as spies, assassins, blackmailers, ambitious nobles and a reluctant Heir wait in the wings.

"Fool!" is a 420,000-word interactive fantasy novel by Ben Rovik. It's entirely text-based, without graphics or sound effects, and fueled by the vast, unstoppable power of your imagination.

Dive-roll into the tightrope world of Brenton's courtly entertainers, where your jests can see you seated at the right hand of power, or set down to the gallows.

What manner of fool are you: the shrewd knave ever ready with a venomous quip? The renowned artiste at pains to stay above the political fray? The bawdy buffoon known as much for off-stage antics as on-stage mirth? Or the clever counselor whose real audience is the noble ear they whisper into? Face unruly audiences onstage and skulduggerous schemers in the wings! Can you sling keen jests and still evade the whipping-post and assassin's blade? The kingdom itself will be shaped by your choices!

When the Master calls, you'd do well to come running—with bells on!