The Mysteries of Baroque - Press Kit 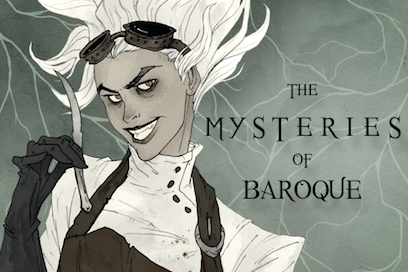 The Mysteries of Baroque -- Rise from the dead to take revenge on your killers!

SAN FRANCISCO--September 20, 2018: Choice of Games announced today that "The Mysteries of Baroque," the latest in their popular line of multiple-choice interactive-fiction games, is now available on Steam, iOS, and Android. It's 35% off until September 27th.

Mad science raised you from the dead! Pursue justice or vengeance, love or secrets, as you save or destroy the world with forbidden eldritch power.

"The Mysteries of Baroque" is a 200,000-word interactive Gothic horror novel by William Brown, where your choices control the story. It's entirely text-based—without graphics or sound effects—and fueled by the vast, unstoppable power of your imagination.

One dark and stormy night in a remote castle in the mountains, you awake anew, resurrected by the brilliant Dr. Holofernes. But even a mad scientist can't keep you alive forever. As the procedure reverses itself over time, you will begin to die again. You must fight to stay alive long enough hunt down your killers, avenge yourself, and protect the ones you love.

Operating out of the mysterious Grand Guignol Theater, your quest will take you through the darkest shadows of the city of Baroque, the City of Dreadful Night, from its vast subterranean slums to the opulent mansions of its jaded, debauched aristocracy. Will you lose yourself in the distractions of romance, assure your own survival through the Holofernes Procedure, or sacrifice everything to take your revenge?

You died betrayed. You died in pain. And your troubles are just beginning.