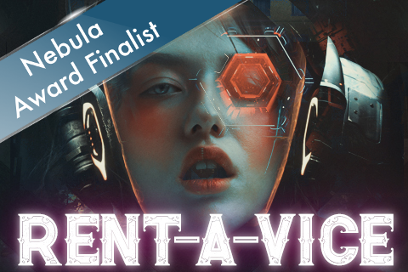 SAN FRANCISCO--September 28, 2017: Choice of Games announced today that "Rent-a-Vice," the latest in their popular line of multiple-choice interactive-fiction games, is now available on Steam, iOS, and Android. It's 25% off until May 31st.

What doesn't kill you...kills someone else, and leads you down an ethical rabbit hole. In the near future, paying users can rent the "virtual experiences" of other people. These "feeders" sublet their own bodies, at the risk of their own lives, so that customers can safely enjoy extreme, potentially self-destructive vices, like binge eating, cliff diving, or worse.

"Rent-a-Vice" is a 150,000-word interactive cyberpunk-noir mystery novel by Natalia Theodoridou, where your choices control the story. It's entirely text-based--without graphics or sound effects--and fueled by the vast, unstoppable power of your imagination.

You're a private investigator with a bad habit, an ex, and mountains of debt--troubles so deep that you stand to lose custody of your kid. When a mysterious client asks for your help finding their missing lover in the seamy world of virtual experience, it's up to you to gather evidence, experience the technology for yourself, and solve the case.

Delve into the darkest corners of the clandestine Rent-a-Vice industry. If you believe the etho-politicians, VE compromises the well-being of society, and normalizes vice and disorder. But what are users after? Is it entertainment, or something deeper? And is there anything in it for the feeders, other than profit?

As for you, will you resist your own vices, or go all in?

Natalia Theodoridou is a media & cultural studies scholar, the dramaturge of Adrift Performance Makers, and a writer of strange stories. Her work has appeared in Clarkesworld, Strange Horizons, Beneath Ceaseless Skies, Apex, Shimmer, and elsewhere. She was shortlisted for the if:Book UK New Media Writing Prize 2017 and is an editor at sub-Q interactive fiction magazine. For more, check out www.natalia-theodoridou.com.