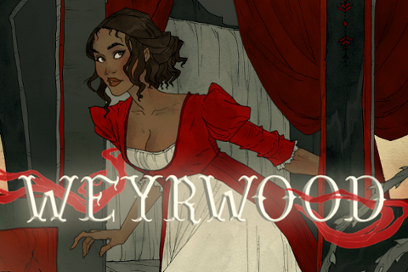 Weyrwood -- Advance in Society and defy your daemon overlords!

SAN FRANCISCO--November 29, 2018: Choice of Games announced today that "Weyrwood," the latest in their popular line of multiple-choice interactive-fiction games, is now available on Steam, iOS, and Android. It's 40% off until December 6th.

Advance in Society and bargain with creatures in the Wood in a Regency fantasy of manners, daring, and magic. Will you join your daemon overlords in destroying your hometown or will you defy them?

"Weyrwood" is a 174,000 word interactive fantasy novel by Isabella Shaw, where your choices control the story. It's entirely text-based—without graphics or sound effects—and fueled by the vast, unstoppable power of your imagination.

You are a fledgling member of the shabby-genteel, you've returned from your education to disentangle your inheritance from your small town's oblique magical property laws. Attend assemblies, call upon friends and neighbors, withstand scandal and intrigue, and court prospective suitors as if your life depended on it—for it does. Maintaining your status as a member of the Gentry and living among the Willed depends upon keeping your spina, a magical currency. Otherwise, you will serve as a tithe to the daemons and join the Fallen, their Will-less thralls.

Yet you cannot remain only concerned with your own affairs. Someone is tampering with the magical contract that binds Prosper, the Wood, and the daemons to the tenuous arrangement that you now enjoy.

Can you survive long enough to claim your inheritance and return to the City—or to remain in Prosper and enjoy the abundant blessings that wealth, freedom, and influence can grant you?

What would you sacrifice to keep from Falling?

Isabella Shaw is a writer and musician, currently based between the Czech Republic and Finland. In addition to writing fiction and poetry, she is an opera singer and core member of early music ensemble Motus Harmonicus. She sometimes dreams the future, and loves forest and sea. Isabella initially studied English at the University of Cambridge, with a focus on medieval and early modern literature and languages. Her poetry book, "Songs of Remembrance," was published in 2016.