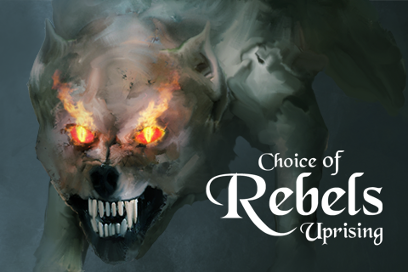 Joel Havenstone is an amateur political scientist, theologian, critic, philosopher, Choice of Games forum moderator, and (now) writer of interactive fiction. Choice of Rebels has grown out of stories he's been telling in one medium or another since he was ten years old. Joel hails from a crumbling Hegemony and has lived and worked on the outskirts of an insurgency or two.

Special thanks to my wife and kids, for putting up with years of long writing sessions. Secondly to the Choice of Games team members who put what must have felt like years into editing the monstrously complicated files - Adam, Becky, Jason, and Mary.

The game would be far weaker if it hadn't been read and reviewed by dozens of CoG Forum members at every stage of development. That leaves me with a lot of people to thank!

Readers to whom I owe a particularly massive debt include:

For major advice, review, and/or engagement with the game and the world over a lengthy period, my thanks go out to:

Finally, a special word of thanks to Don Elliston, aka "dashingdon," for freely hosting my work in progress as well as so many others'.