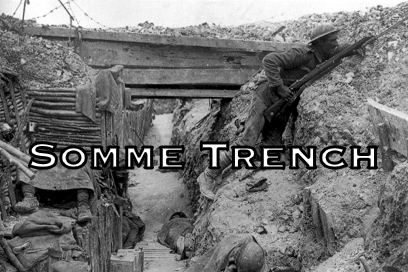 Andrew J. Schaefer has been a history buff for almost as long as he's known about history, and loves any opportunity to use historical events like the Battle of the Somme to provoke people to think more about how they approach their own lives. He is a lawyer and aspiring world traveler who lives with his family in Maine.

Special thanks to my German brother-in-law Matthias Garn; and to Alex Clifford, Brad Toler and the other beta testers who provided invaluable feedback on early versions of Somme Trench. I spent countless hours researching the Somme specifically, and World War I generally, and gained especially useful insights from the books Goodbye to All That by Robert Graves, and Back to the Front by Stephen O’Shea. Moreover, this being the early 21st Century I relied heavily on internet sources, including numerous historical narratives and first-person accounts from soldiers serving on the Western Front. Wikipedia and the BBC were, in particular, sources of enlightening information. Additionally, the Commonwealth War Graves Commission provided an extremely helpful chronology of the battle. While some of the names in Somme Trench are of actual, historically-noteworthy people; and while the game tries to remain true to the general chronology of the Battle of the Somme; the specific events depicted in Somme Trench are fictional.