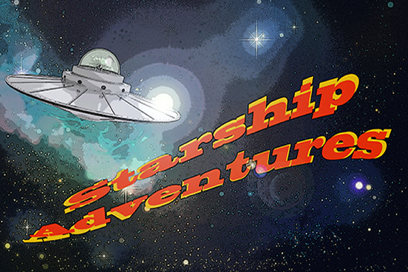 The space background is under a Creative Commons licence and is by plank. The UFO was bought from iStock and is by AbsurdWordPreferred. The rocket is a free stock image from Deviant Art. Those images were combined, adjusted, and edited by Jac Colvin.

Felicity is alarmingly prolific, and keeps her ifdb page up to date. Jac wrote The Draconic Challenges for the Windhammer Prize. Felicity wrote After the Flag Fell for the same prize, and won. Felicity Banks is also one of the writers for Tin Man Games' app magazine Choices: And The Sun Went Out. Felicity Banks' first Hosted Game is Attack of the Clockwork Army. Eric Moser's first Hosted Game is Community College Hero: Trial by Fire.