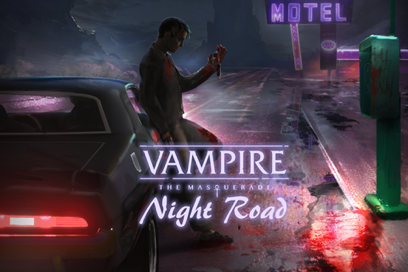 Kyle Marquis is the author of five Choice of Games adventures, including Empyrean, Silverworld, and The Tower Behind the Moon. He lives in Western Massachusetts with his cat, his laptop, and several water-damaged copies of early 90s White Wolf games. His latest game, Night Road, takes players across the World of Darkness as a vampire courier trying to survive the desert highways of the American Southwest.

About World of Darkness

World of Darkness is a transmedia entertainment brand encompassing a number of modern fantasy horror franchises, including [i]Vampire: The Masquerade, Werewolf: The Apocalypse,[/i] and more. Through tabletop roleplaying games, video games, board games, literature, comic books, and more, these franchises tell mature stories in a dark supernatural fantasy layered over our modern world. Since 1991, World of Darkness has defined monster-perspective entertainment for a generation of fans. For more information visit www.worldofdarkness.com.