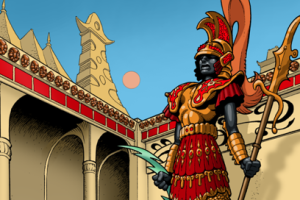 This post was written by Danielle Goudeau, author of Choice of the Petal Throne, which released on April 10th.

I have a game coming out tomorrow, and for a long time I believed it would never be finished. The history of Choice of the Petal Throne is about four years long and consists of a series of punctuated equilibria. The first third of the game took three of the four years, written in bursts whenever writer’s block, depression, self-doubt, and life all managed to get out of the way at once. Then, in 2014, I found my stride and managed to write the rest. I wanted to share my journey and my solution with anyone out there who’s 1/4 or 2/3 through their game, but having trouble seeing the end.

I began writing my game because I really adore the setting of Tékumel, which my husband introduced me to, and wanted to do my part to help it reach a wider audience. This is a game world that is unique and thoughtful, and a man’s life’s work, but which very few people have heard of.

I was neither a writer nor a coder, and learning ChoiceScript while also trying to come up with a plot and a story was very intimidating. I had only done two types of writing in my life: a very dry science paper, and various characters for one-shot LARPs with my husband. These last are sort of like writing a single scene from a dozen or more points of view. There’s no movement of the plot and the writing is of the info-dump variety.

Still, I pretty quickly wrote what would be the very first scene of the game, a short intro using an in medias res stat building scene. A few weeks later, my husband got into college across the country and we moved, and I didn’t really touch the game again for a year.

In mid-2011, Dan, long-suffering and infinitely patient patron that he is, suggested I try to write the second scene and enter the pair into IntroComp. I rose to the challenge and spent a productive few months turning out a game intro that managed to snag third place, which was pretty exciting at the time. I was now poised to build on that success and finish the other 80% of the game, but in the background things were falling apart for me. Moving across country, struggling with a new job, and living off a single income–not to mention some inherent faults in brain chemistry–lead to severe depression; I wouldn’t touch the game again until I moved back to California in late 2012.

I’m now going to skip ahead a bit, past more cycles of brief progress and lengthy setback, to early 2014, which found me only one scene ahead of where I’d been in late 2011.

2014 was the year I told myself I was either going to finish this game or delete the whole damn thing. With eight scenes left to write, I was plagued with self doubt, and probably had more aversion to working on my game than I had ever had to doing anything. This was the cycle:

1. Decide to work on my game.
2. Experience frustration, and remember all the other times I’d failed to make progress.
3. Avoid the game because it was a symbol of my failure.
4. Go do something else.
5. Start feeling happy, but also guilty about being unable to persevere.

How did I break that cycle? I would credit that with four things.

The first was an actual “Eureka!” moment. I was reading an article by an author I really like and had two realizations. The first was that I felt like a fraud because here I was, in my mid-30s, with no training, trying to write a game without any previous experience. I had been pre-failing myself, but this author I admire was talking about starting to get serious about writing in her 30s, and in the other room was my husband who had just changed his career in his early 40s.

The article also touched upon the process of writing and revising books, and it made me realize that I was always comparing my first drafts to other people’s published work. I’d often be writing my game and then go read a book by Terry Pratchett or some other luminary and feel inadequate. I would set unrealistic expectations for myself and then use my failure to meet those as evidence that I wasn’t competent to write anything. By confronting these feelings, and comparing them to other people’s experiences, I learned not to let the perfect be the enemy of the good, and to accept what I wrote for what it was and move forward, trusting future-danielle, editors and beta-readers to help me fix it.

Second, I got some very helpful Cognitive Behavioral Therapy, which is sort of like getting user training for your brain, and dealt with my actual depression. Since depression adds huge inertia to accomplishing anything, healing was crucial.

Third was an astute lesson from a therapist: I can’t just expect to power through things. When I associate failure with something it hurts to do it, and when I try to just push through and then stop because it hurts, I just build up more negative associations, increasing the pain and perpetuating the cycle.

At this point, typing on my game was like making myself stick my hand in a fire, and every time I tried to do it, it got harder and harder. The solution was to slowly and methodically build up positive associations. The way I did that was to work on the game in 20 minute bursts. Even if I was on a roll, I would stop after 20 minutes, so that my last thought was “Yay! I completed my goal!” This sounds silly, but really worked. The only thing I counted as a failure was not sitting down. Even if all I did was correct typos for 20min, I marked it a victory. After a few weeks I was at 30, 60, 90min. That 90 minutes per night, four nights a week pattern became the stride that would let me finish the game, and making a commitment to work at a moderate pace, but without protracted breaks kept momentum.

The last thing I did was reach out to more people for cheerleading and emotional support. I would ping Choice of Games about my progress, or talk through plots and setting details with my husband. I’d ask him to read over what I wrote, or help me outline a scene. Weirdly, having progress check-ins for the game (Finish X scene by Y date) did not help, but only increased my sense of dread and failure once I fell behind. However, having “what I did last week” conversations really helped me feel like I was making progress, and that feeling that I was doing well created allowed me to do well.

Crisis in my life outside of writing didn’t go away, but with a new outlook and a method for working, I turned writing this game from an obligation and a burden that I dropped when life got hard and I was out of fucks to give, into a routine that I could use to gain a sense of accomplishment and progress when everything else felt like it was falling to pieces. Writing became such a source of personal fulfillment that when I handed over the finished version I found myself unable to stop the habit of weeknight work. Now, as I write this, I can glance down at my iPad to see the app icon for a game I wrote, and I feel a mix of pride and trepidation and determination. It’s amazing.