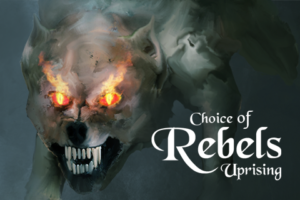 Choice of Rebels: Uprising is a 637,000 word interactive fantasy novel by Joel Havenstone, and Choice of Games’ latest release. As an outlaw rebel in the greenwood wilderness, you must steal to survive your first brutal winter, or watch your people starve if you can’t feed them. Win yeomen, helots, merchants, priests, and aristocrats over to the rebel cause…or turn them into your worst enemies. I sat down with the author to talk about the game. Choice of Rebels: Uprising releases Thursday, November 9th.

Rebels is seven years in the making. Tell me a little about the history of this game.
I started writing Choice of Rebels as soon as I played Choice of the Dragon.  (Well, probably after about the sixth playthrough.)  I’ve always loved telling interactive stories, but my earlier attempts to do that on a computer always fizzled out thanks to my weak programming skills.  With ChoiceScript, I’d finally discovered a language that I could get my head around.

The story grew out of a college Dungeons and Dragons campaign I ran years and years ago. A couple of CoG authors were players (Adam of Choice of the Dragon, Broadsides, and Affairs of the Court, and Rebecca of Psy High and First Year Demons). That campaign centered on a slave revolt against a magic-wielding empire; the players had to weigh their desire to bring down a terrible social order against the dangers of anarchy and the likelihood of even worse rulers filling the gap they’d created.

There are a couple of reasons it took me seven years to complete the first Rebels game. One is that it’s been very much a spare-time project, during a time of my life when I’ve had to juggle demanding day jobs and the arrival of two kids. The other is that as a fan of long, branching stories, I wrote some pretty long branches. I enjoy following ideas and seeing where they lead. Some of the length also stems from wanting to allow meaningful variety between characters; allowing the main character to come from either extreme of the social spectrum, or to be a wizard, religious founder, or military commander, required writing quite a lot of variation into the game.

What kind of world is Rebels set in? What influenced you in writing it?
It’s set in an empire that survives by killing its slave class through blood extraction. This system is also in growing crisis, ripe for the rebellion you launch — though only hints of that crisis are evident in this first game, which is entirely set on the empire’s periphery. Your home province is a sort of Britain colonized by Byzantines, where much of the high culture vocabulary comes from Greek rather than (as in our world) Latin. The world itself appears to work on many of the principles believed by ancient Greeks: four elements, humor theory of disease, an unmoved mover at the heart of the cosmos, and so on. The religion is a sort of nightmare version of my own evangelical Christianity which has thoroughly lapsed into divinizing the social order.

As for influences, can I say “the world of the 2010s”? The game’s evil empire takes its strength from a particular technology, one which it was the first to master and which now underpins its agriculture, transport, security, and industry. That technology requires the sacrifice of life, and while its collapse is foreseeable, it’s built so deeply into the system that it’s hard for the people in power to imagine changing it. Religion and national identity are being used both to challenge and to shore up an oppressive system, and some of the challengers are markedly worse than what they’re fighting. I didn’t and don’t want to write a straight-up allegory, but the parallels sometimes write themselves.

Are you a fan of interactive fiction? What are some of your favorites?
I grew up devouring the paper kind, CYOA and Joe Dever’s Lone Wolf series, and played some early Infocom games like Zork and Hitchhiker’s Guide. These days, I enjoy a range of stuff in the broader IF genre, from Telltale’s Walking Dead to Hadean Lands.  There’s a lot of good stuff in CoG and Hosted Games, of course. I particularly loved Choice of Robots and A Study in Steampunk, as well as Sabres of Infinity and its sequel.

What are you working on next?
The next Choice of Rebels game.  If this game describes the “Robin Hood” phase of your rebellion — bandits in the wilderness — Game Two will see you spreading the insurgency across the countryside and cities of your homeland.  I’m planning five games in all, as your revolt expands beyond the borders of your province and ultimately succeeds in toppling the Hegemony. Then in Game Five, you’ll have to see what kind of new order you can build in the rubble of the old. It’s a big vision, and I don’t plan on working on any other writing projects until it’s done.

Favorite color? Green.
Favorite word? Winsome.
Profession other than your own you would like to attempt? Trail maintenance in national parks.
Profession you would never wish to attempt? Politician.
Helot or aristocrat? I’m inescapably an aristocrat, but if I’m playing Rebels, helot all the way.