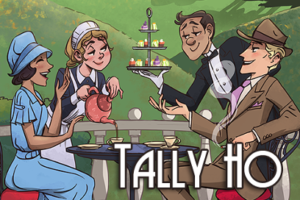 Only a perfect servant can solve a perfect mess! Being the perfect gentleman’s gentleman or lady’s lady doesn’t make you an angel. Can you untangle your employer’s knottiest problems with elegance and unruffled grace? As the valet or lady’s maid of Rory Wintermint, you’ll go head to head with recalcitrant aunts, light-handed houseguests, manage a fox hunt and corral exotic birds! It’s England between the wars! When your employer, a proper young gentleman or lady named Rory Wintermint is summoned to their aunt Primrose’s country house Ritornello for a weekend, it’s up to you to make everything run smoothly…or not! Glide gracefully behind the scenes to arrange everything from the flowers to their love life, or leave Rory to their own devices as you pursue crime, adventure, and romance! Will you lie, cheat, and steal to ensure your employer’s happiness, or will you insist upon personal integrity? Tally Ho is a 638,000 word interactive novel by Kreg Segall. I sat down with him to talk about his latest game, which releases tomorrow, Thursday, December 14th.

Tell me about the world of Tally Ho. This is inspired (maybe even a little more than inspired) by the works of P.G. Wodehouse, with a touch of Dorothy Sayers.

The world of Tally Ho is very much the idyllic world of P.G. Wodehouse’s Jeeves and Wooster novels and short stories. The setting will be utterly familiar to anyone who has read the novels or seen the TV adaptation, but also very easy to ease into for people unfamiliar with the source material.

The world is a totally idealized and comic version of the leisured class in early 1930s England. The most serious problems are domineering aunts, lost jewelry, getting engaged, getting out of engagements, and keeping the employ of one’s temperamental pastry chef. Wodehouse’s characters are rich, leisured, romantically perplexed, and often rather dim, but always lovable. In this chaotic setting, the only one who can restore order is Jeeves, the nearly omniscient gentleman’s gentleman. He is able, with his enormous brain and knowledge of the psychology of the individual, to set things right.

My game takes that frothy setting and poses a few questions to it: What happens when the protagonist of that narrative is the servant, rather than the employer? Is it possible to have a fully-realized love story or even tragicomedy in a setting so totally light and comic? I wanted to take that genre and see how far it bends.

Wodehouse is of course the patron saint of this work, but I was also inspired by Downton Abbey, Ishiguro’s The Remains of the Day, and Agatha Christie as well.

What drew you to want to set a story in this period, with these types of characters?

Wodehouse’s stories contain certain characters who absolutely must put in appearances if you want to be true to the source material: the imposing aunt, the idle goof, the maddening ingénue, and so forth. Most of the characters in Tally Ho were sparked by one or more classic Wodehouse characters. There are a few who I added in, though, that Wodehouse would never have dreamed of including, who I created to help me play with genre more.

But Wodehouse, for all of his genius at plotting, doesn’t try to make his characters wholly three-dimensional, because he’s writing farce. So what interested me is figuring out how to take a setting and group of characters that are designed for farce, and create a story that can shift (depending on one’s choices) back and forth from outright comedy to really touching love stories and other emotional moments.

It was a lot of fun to research the time period, but really, this world exists in a pastoral, between-the-wars neverland. The big forces of history can’t intrude on Aunt Primrose’s estate.

This is not your first rodeo with Choice of Games. What was different for you this time around, design-wise and writing-wise?

I could talk here about getting more familiar with ChoiceScript and designing a careful outline, but the biggest difference, by far, was that while I was writing Tally Ho I was reading and participating on the Choice of Games forum regularly. I was able to have a back-and-forth with writers and players about design and effective stat mechanics, about creating more satisfying endings, and about how to account for many different types of main characters.

For example, in chapter seven, the game could potentially end, and I expected some players would be taken aback by what might be perceived as a “bad ending.” For my previous game, I would have worked this out on my own, but for this game, I had a big community of seasoned players and designers moments away to help me craft that sequence to be as satisfying as possible. The Choice of Games forum is extraordinary.

600,000 words. But are they efficiently coded? And how on earth did you manage?

As for how I managed–I am a college professor, so I was lucky enough to have much of last May, June, July, and August to write. I wrote for perhaps six hours a day, and wrote chapters seven, eight, and nine over the summer. Chapters eight plus nine together are as long as the entire Midsummer game, which took me a full year to write!

During the school year it is much harder: I wake up early and write for an hour before heading to school, and I try to squeeze in an hour at night if I am done grading and preparing lectures for the next day.

Here’s what I value most in interactive fiction. In addition to lovely prose, I want to feel that the narrative is generous. What I mean is that I want to read and be rewarded for my choices with story that acknowledges my choice, that cares that I am crafting the narrative in a particular way. I want to be surprised by how expansive a narrative is, and I want to notice all of the twists and turns that I am choosing not to take, knowing that when I return to explore them, they will be worth the exploration. I call that “generous” because I know how much time and effort it is for a writer to spend the time honoring choices with unique prose, to create callbacks to choices made much earlier. It is a moment of communion between the reader and the author. That is largely the feeling I am going for in Tally Ho, and that’s what kept me going, even in the thick of it. I want to feel that choice 7 out of 13 is as special and hand-crafted as choice 1. I never want to feel like I am in the choice that the writer didn’t especially want to write.

The other thing that took a lot of time is that I wanted the player to feel like this game has their back. If you succeed in a stat check, great! You did something that you wanted to do. If you failed, you ended up creating a new plot point, probably something funny, but nothing that is going to mess up your story or stress you out. I believe very strongly in the idea of failing forward–if you fail, you made something else happen, and let’s explore that. It’s sure to be ridiculous, but I as the author am pulling for you, not serving as the hand of fate condemning you to losing the game. And so in that way I hope to create the feeling of collaboration. And that takes a while to write. So, yeah. 638,000 words!

Any new IF you’ve enjoyed you want our readers to know about? COG or otherwise?

Since writing A Midsummer Night’s Choice, I’ve worked through more of Choice of Games’ offerings. Over this year I especially enjoyed Choice of Robots, Slammed!, and Cannonfire Concerto. I made it a point to play Hollywood Visionary while writing Tally Ho to write a few scenes that were influenced by Hollywood; I just loved that game as well.

Aside from Choice of Games, I want to point in particular to Ebi-hime, a writer who I think is doing really interesting things with genre and narrative in interactive fiction, specifically interactive visual novels. Certainly, she has been the biggest influence on my own writing as far as her experiments with creating stories that dare to have their feet in high comedy, romance, dark tragedy, and other genres, sometimes whipping back and forth with great speed. I recommend in particular The Way We All Go.

What’s next for you?

Before anything else I am doing some scholarly writing about some of Edmund Spenser’s short narrative poetry. I have two pieces that I’m in the early stages of planning.

I am also filled with lots of idea for more games for COG, and I am in the process of refining some pitches. While Tally Ho is a complete work unto itself, I am not sure I am done exploring this world. I’ve been thinking in the voices of these characters for over a year now. I don’t think I’m wholly ready to let them go!