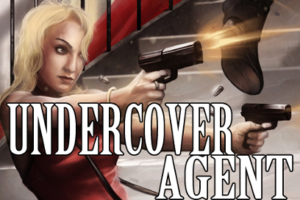 We’re proud to announce that Undercover Agent, the latest in our popular “Choice of Games” line of multiple-choice interactive-fiction games, is now available for Steam, iOS, and Android. It’s 25% off until February 1st!

Think fast and lie faster! When you go undercover to retrieve a deadly new bio-weapon, can you pull off the mission and escape with your life?

Undercover Agent is an interactive novel by Naomi Laeuchli. It’s entirely text-based–135,000 words, without graphics or sound effects–and fueled by the vast, unstoppable power of your imagination.

You are the top operative at the DTU (Domestic Terrorist Unit), a covert agency that specializes in investigating terrorist groups on US soil. As Silas Bishop’s administrative assistant, you are in a prime position to spy on his business and search for the deadly weapon his scientists have engineered. But word has leaked there’s a mole, and you’re running out of time.

Can you depend on your computer hacking skills to get you out of a tight spot or will you count on your brawn? Would you rather sneak where you shouldn’t be found or bluff your way in with pure charisma and charm? And what about those friends you’ve made while undercover? Can they be trusted, or would you rather just use them? Cover your tracks, delay the mole hunt, and plot your escape.

• Rescue your best friend or leave him to his fate
• Avoid detection or kill those who suspect you
• Find love with your handler or even your enemy’s son
• Frame your coworkers or protect them
• Plant bugs, hack computers, crawl through vents, and use your charms
• Bribe, torture, or threaten information from targets
• Go on the run or earn a promotion
• Expose the mole in your own agency or join forces
• Retrieve the weapon, destroy it, or sell it

We hope you enjoy playing Undercover Agent. We encourage you to tell your friends about it, and recommend the game on StumbleUpon, Facebook, Twitter, and other sites. Don’t forget: our initial download rate determines our ranking on the App Store. The more times you download in the first week, the better our games will rank.