Grab a glove and pitch your way to the top of the major leagues! Baseball season is back and you’re on the mound. Starting your career as a rookie pitcher, you’ll develop your repertoire and navigate clubhouse politics in the big leagues. Over eight seasons, you’ll use your talent and charisma to win on–and off–the field.

Tell me a little about your background with baseball. Did you play, growing up? Do you follow any teams now?

When I was a baby, my favorite pacifier had a baseball on it. Somehow or other my parents lost it one day and I would never take another pacifier after that.

I played Little League for a few years, filling the oh-so-valuable role of light-hitting corner outfielder. But really I’ve just been an Atlanta Braves fan for as long as I can remember. For a long time when I was a kid, I wouldn’t leave the house without a Braves hat on and chewing gum in my mouth (That’s gum that baseball players are chewing, right? Couldn’t be tobacco.) 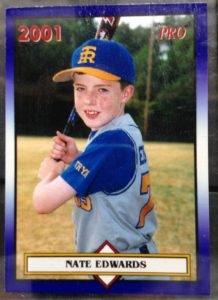 What was the most challenging thing about writing this game?

I had never written anything at this kind of novel-length scale before, so keeping the story organized throughout was a new challenge for me. And then when the story is interactive and two players might get very different versions of the story, there are even more organization problems and continuity errors to worry about. I’m very thankful for the beta testers and editors who are able to catch when I’ve, say, introduced the same character twice, or written that a character threw the ball all the way from first base to…first base again.

How did you find ChoiceScript was for meeting the needs of your fairly complex pitching sim?

I got along very well with ChoiceScript. I got used to it quicker than other IF languages like Inform or Twine. I like a language where I can learn every tool that’s available to me so I can then know how to be creative with the code without constantly worrying that I’m missing out on a function that would make everything ten times easier, and wasting my time looking things up. And thankfully no sport has better statistical information than baseball, so it’s easy to implement realistic odds for everything that happens on the field. 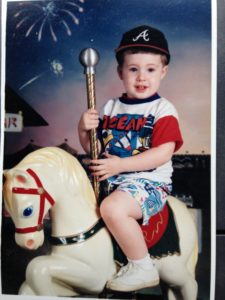 This is really only the second sports game Choice of Games has done, the other being Slammed, about wrestling. What made you want to create a piece of interactive fiction slash pitching sim?

The first things I ever programmed were little choose-your-own-adventures for my TI-83 calculator in middle school. The most complicated thing I made was a soccer management “sim,” so you could say I’ve been making sports-themed interactive fiction games since I was fourteen.

Baseball is my favorite sport, so I knew I wouldn’t get sick of writing and thinking about it for the year it took to put this game together. And there’s been a recent trend of putting strong story modes in sports simulation games like Madden and FIFA, though a modern baseball game hasn’t pulled that off yet. If you don’t mind going back a few console generations, MLB Power Pros has a cartoonish and silly but mechanics-rich story mode that was an inspiration for this game. And on the off-chance you can speak Japanese, that series is still going as Jikkyou Powerful Pro Yakyuu, though it hasn’t been localized to English since 2008. I don’t speak enough Japanese to dig into the story modes very far, but I import those games whenever a new one comes, they’re excellent.

Well I’ve got a chicken sandwich sitting next to me I’d like to work on as soon as I’m done writing this answer, but I’d love to write something for IFComp this year. And I have more ideas for Choice of Games if you’ll still have me after that chicken sandwich joke.

Gli (one of the Italian words for “the,” pronounced like “lyee”)

Profession other than your own you would like to attempt?

Profession you would never want to attempt?

Can you explain the infield fly rule?

This is a tender subject for Braves fans, I’m afraid. Basically if there are runners on first and second (or the bases are loaded) then any fly ball that should easily be caught by an infielder is automatically an out, whether anybody caught the ball or not. This rule exists because otherwise the defense could easily turn a double or triple play on this kind of fly ball, because the runners don’t know until the ball is caught whether they need to be at their base or at the next base to be safe. So the defense could intentionally drop it and throw them out.

Unfortunately for the Braves, the rule came into effect in an exceptional situation where it benefits the defense instead of the offense. The shortstop accidentally didn’t catch a fly ball way out in left field, so the runners all advanced and the batter was safe. Except, the umpires decided he should have easily caught it, so that’s an infield fly and the batter is out. And this was in a decisive moment in a winner-take-all playoff game. So the fans did the logical thing and threw a bunch of garbage on the field to make their displeasure known. Ah, memories.

The infield fly rule is tricky and complicated for sure, like trigonometry. But the balk rule is like quantum physics.