The Hero Project: Open Season — Can you win America’s #1 reality show for heroes? 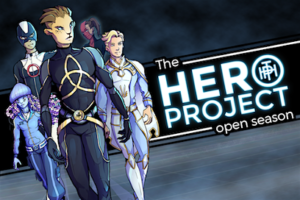 We’re proud to announce that The Hero Project: Open Season, the latest in our popular “Choice of Games” line of multiple-choice interactive-fiction games, is now available for Steam, iOS, and Android. It’s 25% off until April 12!

Can you win The Hero Project, America’s #1 reality competition for heroes? Team up with allies old and new to unravel a conspiracy threatening your world, and save the planet from destruction!

The Hero Project: Open Season is a 170,000-word interactive novel, and the final installment of Zachary Sergi’s Hero Project series. It’s entirely text-based–without graphics or sound effects–and fueled by the vast, unstoppable power of your imagination.

In a competition full of heroic stars, will you rise high enough to influence the way society views Powered people? What will you do when your fight soars to heights you never expected…and when your journey falls back into the perspective of the original Heroes Rise Trilogy main character?

As you rise, the decisions you make will shape the world for your Powered peers—and shape your relationships and potential romances. Will you fight for Powered rights or personal gain?

• Play as male, female, trans, or non-binary; gay, straight, bisexual, non-categorizable, or ace
• Play a new hero, in a brand new season of The Hero Project
• Use your animalistic Powers to survive deadly missions
• Kick slugging butt with Prodigal as your sidekick
• Become an advocate role model, a powerful kingpin, or a dangerous freedom fighter
• See Black Magic, Jury and Jenny again
• Secure the fate of a new Powered capital, or will you exploit its resources
• Untangle the conspiracy behind the scenes of The Hero Project fast enough to save the entire world
• Play as the original Heroes Rise Trilogy hero in two interactive interludes!
• Enter into one of a ten different romantic relationships!

In Open Season, everyone is a target. Who is yours?

We hope you enjoy playing The Hero Project: Open Season. We encourage you to tell your friends about it, and recommend the game on StumbleUpon, Facebook, Twitter, and other sites. Don’t forget: our initial download rate determines our ranking on the App Store. The more times you download in the first week, the better our games will rank.