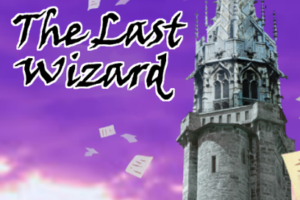 It’s a regular Tuesday evening when you are pulled from the Earth and sent to a place where magic still exists. You are given a wizard’s tower filled with arcane knowledge that you are expected to learn. Thrust into a war between two nations, it’s up to you to save the kingdom where you now live. It’s 40% off until August 10th!

The Last Wizard is a 185,000 word interactive fantasy novel by Mike Walter, where your choices control the story. It’s entirely text-based—without graphics or sound effects—and fueled by the vast, unstoppable power of your imagination.

Your choices will influence who rules the land and what happens to the civilians living there. Will you find love or will you strive to return to the life you were forced to leave behind? Will you save the kingdom, or will you betray the people for your own personal gain? The choice is yours!

• Play as male, female, genderfluid, or non-binary; gay, straight, or asexual
• Find romance with a variety of interesting characters.
• Learn and master multiple powerful spells.
• Build a powerful golem, ride a dragon, raise the dead, heal the sick, rain fire upon your enemies, fly, become invisible, summon lightning, enchant magical weapons…
• Acquire powerful magical artifacts.
• Save the kingdom or join the enemy.
• Return home to Earth or live your life in a fantasy world.
• Change the fates of two nations!

Mike Walter developed this game using ChoiceScript, a simple programming language for writing multiple-choice interactive novels like these. Writing games with ChoiceScript is easy and fun, even for authors with no programming experience. Write your own game and Hosted Games will publish it for you, giving you a share of the revenue your game produces.