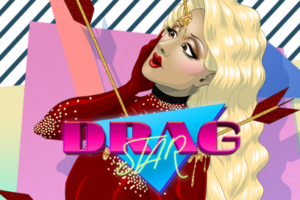 We’re proud to announce that Drag Star!, the latest in our popular “Choice of Games” line of multiple-choice interactive-fiction games, is now available for Steam, Android, and on iOS in the Choice of Games Omnibus app. It’s 40% off until March 21st!

Get ready, honey! You’re a contestant on Drag Star!, the reality TV drag competition. You better throw shade, serve looks, and slay each episode to become the next drag icon!

Drag Star! is a 150,000-word interactive novel by Evan J. Peterson, where your choices control the story. It’s entirely text-based, without graphics or sound effects, and fueled by the vast, unstoppable power of your imagination (and sass).

As a contestant on the newest season of Drag Star! You’ll prove your skills on the S.H.A.D.E. scale: Smarts, Humor, Artistry, Daring, and Enchantment. Through celebrity impersonation, singing, dancing, costuming, and comedy, you’ll need to be sickening in every stunt to win it all. But how will you steal the show?

Enter the Twerkshop with your own catchphrase, meet your new drag family, and try to maintain self-care and integrity while still playing to win. How will you balance competing and bonding with castmates like Lady Kali, Scandal Dupree, and Dorian Slay? Oh, but there’s more. Not everyone is playing by the same rules—there’s a saboteur on the cast, waiting for the right opportunities to cause even more drama.

Will you emerge as a finalist and grab the crown? Will you own the catwalk and the title of Fan Favorite? Will your wig stay on while you whip it back and forth? And will you be able to save the show from a devilish saboteur?

• Play as a drag queen, a drag king, or a nonbinary or genderfluid performer.
• Throw shade, turn looks on the catwalk, dance the house down, and write original jokes and song lyrics.
• Compete against a diverse cast of fierce drag performers—or are you here to make friends?
• Specialize your style: villainous or sweet, campy or elegant, classic or avant garde
• Build your drag family: win episodes together, be a mentor, stoke or resolve rivalries.
• Solve the mystery of the sabotage—or ignore that drama entirely.
• Win Fan Favorite or Most Congenial.
• Join the Abbey of the Perpetually Fabulous, a new drag religion.
• Maintain your self-care or push yourself and take risks for more fan attention.
• Make it as a finalist in Season Eight of Drag Star! and win the crown.

Don’t be a filler contestant—slay your way to legendary status!

We hope you enjoy playing Drag Star!. We encourage you to tell your friends about it, and recommend the game on Facebook, Twitter, Tumblr, and other sites. Don’t forget: our initial download rate determines our ranking on the App Store. The more times you download in the first week, the better our games will rank.