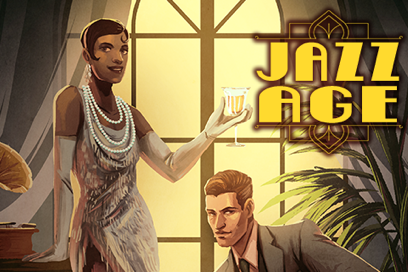 Find love, fame, and fortune in New York, with an intriguing cast of flappers and federal agents! Temptation is everywhere in this steamy 1920s romance!

It’s 1926 and there’s no place on Earth like New York City. You left the small town you grew up in to seek fame, fortune, and romance on Broadway, but success and true love have both proven more elusive than you imagined. You never dreamed you’d be torn between helping one lover save their illegal speakeasy, while another lover tries to destroy it!

I also write paranormal romance/urban fantasy and romantic suspense, which are available on all major platforms (Amazon, Kobo, Google Play, iTunes, Barnes & Noble). Occasionally, I also release short stories, and readers can find links to all of my published work at www.nicolarwhite.com. One other fun project I’ve been working on is a graphic novel called Wild Rose, which is a re-telling of an Irish folktale. You can find out more about it at www.wildrosecomic.wordpress.com.

What did you find most challenging about creating a romance novel told in a multiple-choice fashion?

Once I got the hang of coding ChoiceScript, the most challenging part was trying to keep all the potential endings and variables straight in my head! It’s tough to make all possible choices and endings equally satisfying, but I enjoyed the challenge. I was determined to make it impossible to “lose” the game, which in romance (to me) means having an outcome that is consistent with romance genre conventions. Most romance writers define romance as having an HEA (happily ever after) or HFN (happy for now) ending.

Jazz Age has a lot of characters that really put the reader right in the 1920s–a government agent, a speakeasy owner, a theater impresario. What were some of your points of inspiration for writing in this period?

I did a lot of research to make sure Jazz Age is historically accurate! The characters are inspired by a number of different historical figures, including entertainer Josephine Baker, Prohibition agent Eliot Ness, and big names on Broadway like George and Ira Gershwin. Josephine Baker was an American-born French entertainer and worked as a French resistance agent during WWII. As a black woman in the entertainment industry, she faced prejudice and discrimination but she travelled the world and lived life on her own terms. Eliot Ness became famous for leading a team of law enforcement agents dubbed The Untouchables by the media. Based in Chicago, he was famous for his run-ins with notorious gangster Al Capone.

Romance novels often promise their readers a happily ever after ending, but here you had to concoct multiple ways the story could come out.

There are plenty of different happy endings available to us nowadays, and I made sure this variety of identities and experiences is reflected in Jazz Age. Regardless of a player’s gender expression or sexual orientation, this game allows them to choose an ending that fits their definition of a satisfying emotional arc.

I always have more ideas than time! I’m currently working on the next novel in my New England Furies series, which is paranormal romance based on Greek mythology, as well as the next issue of Wild Rose. I’m also tinkering with a YA steampunk manuscript and an F/F sports romance. Aside from writing Jazz Age this year, I also became interested in filmmaking and wrote/directed two short films. In the future, I would love to write another game for CoG.