In the Service of Mrs. Claus–Save Xmas as her top secret elven agent! 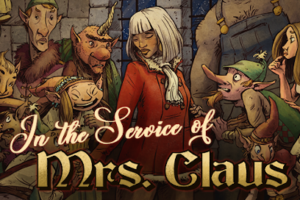 We’re proud to announce that In the Service of Mrs. Claus, the latest in our popular Choice of Games line of multiple-choice interactive-fiction games, is now available for Steam, Android, and on iOS in the Choice of Games Omnibus app. It’s 25% off until December 19!

Let me tell you the true secret of Christmas: Santa Claus died centuries ago. You see, in ancient times, as the Gods began to die, Santa Claus married a goddess. She was worshiped as Bast in Egypt, as Artemis in Greece, Diana in Rome. She’s been called a witch, a hero, an assassin. You call her Mrs. Claus.

In the Service of Mrs. Claus is a 167,000-word interactive fantasy thriller by Brian Rushton, where your choices control the story. It’s entirely text-based—without graphics or sound effects—and fueled by the vast, unstoppable power of your imagination.

When Santa died, Mrs. Claus invested the power of Christmas in Santa’s Heart, which she buried with Santa in a top-security tomb beneath Claus Castle. But now, someone has stolen the Heart. As Mrs. Claus’ top secret agent–her most trusted elf–you must go undercover to recover the Heart and take back Christmas from the forces of darkness.

As you unveil the dark secrets of the Fae, you’ll magic up giant marshmallows and deadly candy canes, romance sweet friends and roguish villains, and vie with the mysterious Krinkle Corporation to save Christmas from ruin. But in the final battles you must decide whether to blast the armies of darkness with your winter elf magic, or join them and betray your mistress.

• Play as a shape-shifting elf who flows between gender, species, and form at will.
• Clash with cults, gods, and giant corporations as they strive to overthrow Mrs. Claus’s empire.
• Use magic to complete clandestine missions as Mrs. Claus’s secret agent.
• Visit earthly children to determine their naughty or nice designations…and presents, if any.
• Decide the fate of Christmas and the Fae world itself.
• Discover the truth about Santa’s death.
• Play nice with your enemies or put them on your naughty list.
• Restore Mrs. Claus to power, betray her, or marry her.

We hope you enjoy playing In the Service of Mrs. Claus. We encourage you to tell your friends about it, and recommend the game on Facebook, Twitter, Tumblr, and other sites. Don’t forget: our initial download rate determines our ranking on the App Store. The more times you download in the first week, the better our games will rank.