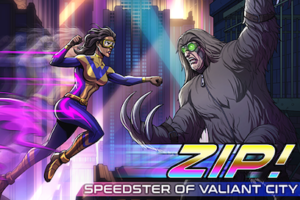 Use your speedster powers to defeat the superpowered Sloth and save the day, all while tracking down a deadly new weapon threatening your city! There’s no room for error in the hero business, not even for the fastest person in the world. One tiny mistake against your deadliest foe threatens to end your career and plunge your city in chaos. Zip! Speedster of Valiant City is a 48,000-word superpowered interactive novel by Eric Moser. I sat down with Eric to talk about his commitment to writing superpowered heroes.

The Community College Hero series, published by Hosted Games, follows the exploits of young adults who are students at essentially a “community college for people with crappy powers.”

There’s lots of action, and plenty of tough choices for the player to make, but I focused primarily on character development and humor, two elements that I think carry most stories. If I’m not invested in the characters, whether it’s in a movie, book, television series, or ChoiceScript game, I lose interest. For me, humor grounds a story in reality; it doesn’t feel authentic when the ass-kicking hero growls their dialogue and never cracks a joke.

And when you find yourself laughing with characters, I think it’s easier to find yourself crying too, because the attachment has been built; it’s real. Players have emailed me telling me how the series brought them to tears, and I can assure you that is a very humbling thing to hear.

Anyway, I really leaned into the idea that even heroes who can’t lift buses or shoot laser beams from their eyes would still need training to control their abilities…but they may not need the very best training. Mediocre training will do just fine! So, we find ourselves at Speck Community College, in the fictional town of Speck, Nebraska, with questionable professors, rookie heroes, and distrustful locals. The school hopes to ease students into their training, but when a new villain targets the school, the kids have to grow up fast!

How did you stumble onto writing ChoiceScript games?

I have no idea! I remember loving so many of the earliest ChoiceScript games, like the Heroes Rise series and Choice of the Star Captain, but I don’t remember what made me decide to take the plunge to become an author.

Until Trial by Fire was published in 2015, I had never published any creative work, so it’s not like I knew what I was getting into. I remember spending most of 2013 and 2014 typing scenes on our living room computer after my kids went to bed each night. It was a painstaking process, and I relied heavily on the support of my wife and encouragement from the folks on the Choice of Games forums. If you’re reading this, but haven’t checked out the forums, I’d encourage you to do so. There are tons of resources for aspiring writers and discussion threads for players to share their experiences about their favorite ChoiceScript games.

What’s the deal with you and superpowered heroes?

Stories about superpowered people can fall into all sorts of genres and can convey all types of themes, so there’s a lot of flexibility there as a writer that appeals to me. I guess I include the powers because I like the trappings, but also, I like the idea of exploring how powers could intersect with our existing societal expectations and institutions.

For example, in Community College Hero, the school requires students to study Hero and Enemy Law and Liability, which can be shortened to HELL. I’m an attorney by trade, and I think there’s a ton of potential to really dig into how the law would have to adapt if people were to start developing powers. I mean, who would insure these people? Who pays for all of the collateral damage? Either the government steps in, or an entire new area of insurance is created. Now some people might be yawning at this point, but I’m like, “I want more of this!” I wish I could have explored the legal aspects even more than I did. Maybe one of these days, I’ll write a superpowered legal thriller.

There’s a lot of thematic freedom, too, in writing superpowered stories. Community College Hero has a lot of coming of age elements, combined with some fish out of water aspects as well.

With Zip!, I switched things up. In this story, I wanted to explore the life of an established hero, perhaps even one past their prime. Thematically, it was a natural fit to make the character a speedster, because no one can outrun their mortality, not even the fastest person in the world. I included some midlife crisis messages in Zip!, as well as themes about keeping up with progress and knowing when to pass the torch to the next generation. These are things we grapple with more as we age, and much of it really hit home with me. I hope players feel the same way, even if you’re one of the people still waiting for others to pass the torch.

Zip! is part of a new thing we’re trying: publishing some shorter games like Choice of the Dragon, which are free with ads. What’s the secret to writing a short but engaging game?

For me, the key word is engaging. For Zip!, I really wanted readers to live the story. By this, I mean there is very little ‘telling.’ This game is almost 100 percent about the ‘showing.’

Your character is constantly on the move, pursuing various goals, but always aware of a looming showdown that could be your last. There’s a lot of dialogue, much of it banter, all designed to develop the characters and further the plot. The story only covers a few days. I chose this tight timeframe to help build tension and stress the sense of urgency. There just wasn’t room for extraneous material.

I used a smaller cast of characters to give each more time to breath. I think I succeeded in doing so, but I’m pretty sure that one character in particular will be a favorite of players. I won’t say who!

Lastly, the vast majority of choices directly affect your progress toward your goals, and in turn, affect the different endings. So, while there may be fewer choices when compared to a standard Choice of Games release, virtually all of the choices are important, which I think will ramp up the tension for the player from the very start.

I love this Sloth villain. Tell me a little about his genesis.

I love him too! I’ll watch what I say to avoid spoilers, but I’ve always thought that the best villains are the ones with legitimate grievances but who then adopt entirely disproportionate measures. It’s like you identify with them, and on some level, you might even root for them, but then they go and do something too extreme, and you’re like, “Oh, why did you have to do that? You lost me there!”

But yeah, I wanted to create the perfect villain for the player’s speedster, and thus the Sloth was born! I was inspired by Aesop’s fable, The Tortoise and the Hare, and the exploration of matching speed against persistence. Being fast doesn’t make you invincible. All it takes is one wrong move by the hare, and the ‘tortoise’ might just end up on top!

I wish I could write these games full-time. It’s always a struggle to choose the next project. I have at least half a dozen fairly well-developed story ideas in my head (or on spreadsheets), a few of which I’ve mentioned to Choice of Games staff.

For 2020, my priority is absolutely to finish All Things End. I want to give my Community College Hero characters the sendoff they deserve and give the players the endings they desire! But I might have time for a side project this year. In that case, I’ll likely continue work on Talon City, a legal thriller set in a city of anthropomorphic birds, or draft a follow-up to Zip!, assuming that players enjoy this one!