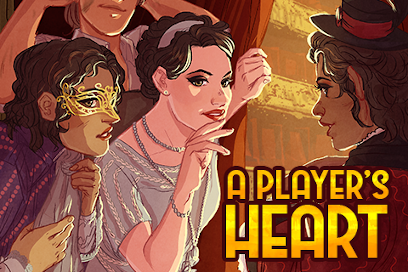 Find love, fame, and intrigue on the stage of the city’s all-woman Opera! Put on a show, survive drama on and off-stage…and win your lover’s heart. A Player’s Heart is a 222,000-word interactive lesbian romance novel by Melissa Scott. I sat down with Melissa to talk about her upcoming game, and the vicissitudes of romance writing. A Player’s Heart releases this Thursday, February 13th for Heart’s Choice.

This is your first piece of interactive fiction, but not, I think, your first romance novel. Tell me a little about your other work.
This is indeed my first piece of interactive fiction, but in my other life I’m mostly known as a writer of science fiction and fantasy. I have written two fantasy mystery series with strong romantic elements—the Points series (Point of Hopes, Point of Knives, Point of Dreams, Fairs’ Point, and Point of Sighs), which I began with my late partner Lisa A. Barnett and continued after her death; and the Mathey and Lynes novels (Death By Silver and A Death at the Dionysus Club), which I wrote with another Choice of Games author, Amy Griswold.

The Points novels are set in the city of Astreiant, where astrology is a complex and important science, and center on the professional and personal relationship of pointsman (a kind of police officer) Nicolas Rathe and ex-mercenary turned guardsman Philip Eslingen. Each novel is a stand-alone mystery, but the development of the relationship is a major part of the ongoing story. The Mathey and Lynes novels are set in an Edwardian London in which metaphysics — magic — is a respectable profession akin to law or medicine. Metaphysician Edward Mathey has just purchased his first practice and rekindled his connection with a former schoolmate, Julian Lynes, a would-be consulting detective, when they are thrust into dealing with a series of mysterious deaths that risk outing their forbidden relationship.

My most recent novel, Finders, is far-future space opera about a trio of salvage operators who stumble into a discovery that may destroy their civilization.

Beyond those, I’ve written more than 30 science fiction and fantasy novels, most of them featuring queer themes and characters. I’ve won the Lambda Literary Award in SF/F four times (and been nominated four more times), and have won the Spectrum Award three times. I’ve written everything from near-future cyberpunk to far-future adventure to space opera in which the “science” is based on neo-Platonic magic, and the starships harness the music of the spheres to travel between solar systems. I’ve also written tie-in materials for Star Trek: Deep Space 9, Star Trek: Voyager, Stargate SG-1, Stargate Atlantis, Star Wars Rebels – and one more that I’m not allowed to talk about yet!

What did you find most challenging about the process? Writing a branching narrative, editing it, or handling the code?
Technically? Handling the code, hands down.  That’s not something I’d ever done before, and, while mercifully ChoiceScript is more language-like than mathematical, I still feel as though I’m “speaking” it at a kindergarten level.

On a conceptual level, though, the most difficult — and most rewarding —part of the process was learning to leave enough space at the center of the story for players to create their own character and experiences. The whole point of novel-length fiction is to put readers into characters’ heads, to show the world through that characters’ experiences, but that’s the exact opposite of what interactive fiction does. The writer doesn’t dictate the interpretation; you can only suggest and steer, and let the players make their own story happen. It was a hard leap to make at first, but once I’d gotten there, it was really fun to tell a story that way. In some ways, it suits my natural style — I prefer to create character indirectly, and allow readers to draw their own inferences — but it’s conceptually a very different kind of story-telling.

This is the first lesbian romance we’re releasing for Heart’s Choice and we would have loved to have it ready for the initial launch, because having a romance game for everyone is really the whole idea. Are you primarily writing for a lesbian audience in your other work?
I was sorry it wasn’t ready for the initial launch, too. I wouldn’t say that my work is written for a lesbian audience—I want as wide an audience as I can get—but it is all definitely written from a lesbian perspective. I mean, it really can’t not be! It’s a huge part of who I am. But I’ve been an out lesbian writer since the 1980s, and that perspective has meant different things and received very different reactions over those decades. It’s a lot less fraught than it was when I started, that’s for sure! And of course some of my stories are addressing issues that are most directly relevant to and subject to debate by a queer audience—the Mathey and Lynes novels, for example, are partly about creating and maintaining queer community—but I also hope they’ll be accessible to a non-queer audience as well.

Tell me a little about the fictional world of A Player’s Heart.
A Player’s Heart takes place in Tristendesande, the rich, sophisticated mercantile city at the mouth of the great river that runs the length of the country. Everyone and everything of importance eventually comes downriver to Tristendesande, or so its inhabitants will tell you; they have nothing but disdain for the people of the rival industrial city of Castago, at the river’s headwaters. But Castago’s power is in the ascendant, and Tristendesande is ruled by a foreign-born regent in the name of her toddler son. Even if its power is waning, however, Tristendesande is a beautiful city — imagine fin-de-siecle Paris or Vienna, carved stone facades and gilding and gaslight. It’s a center of the arts, and at the center of that artistic world are the Theater, where all the roles are played by men, and the Opera, where all the roles are played by women. Devas play female roles, dragons play male roles, and the artifices are responsible for special effects, costumes, and all the other technical pieces. The Opera’s shows are generally bright and frothy, full of song and dance and sparklingly witty dialogue, but often there’s serious point hidden among the frolics. Of course there are also cabarets and other venues, led by the upstart Electricity Theater, where — scandalously! — men and women perform together, on the same stage and in the same skits.

Did you have a character you most enjoyed writing and spending time with?
I think the most fun was creating four love interests. They’re very different women — the best friend, the sparkling rival, the powerful society hostess, the scandalous lead of the rival Electricity Theater — and there had to be good reasons for someone to fall in love with each of them. However, it did create a certain amount of mental whiplash. Just when I’d gotten really comfortable with one of them, and knew exactly why she was wonderful, I’d have to switch to one of the others — and convince myself the she was the perfect lover! The other “character” that I loved was the Opera itself. I really enjoyed creating that social world. from the semi-retired Elders who manage the company and decide on the performances to the students who take walk-ons as they work toward joining the Opera proper.

What are you working on now?
I can’t yet talk about the project that’s currently eating my life (I hope to be able to say more by the end of the month), but beyond that I’ve just completed a fantasy novel, Water Horse, about the queer king of a beleaguered kingdom fighting to twist free of the prophecies that threaten his people. Next up is Fallen, a sequel to Finders, about a weaver of webs for forbidden AI who has to chose between saving her lovers or seeing her people fall into the Long Dark.