Mask of the Plague Doctor–Stop a deadly plague with medieval medicine! 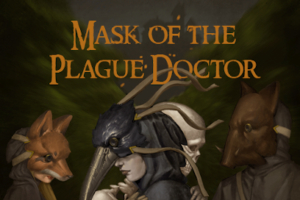 We’re proud to announce that Mask of the Plague Doctor, the latest in our popular “Choice of Games” line of multiple-choice interactive-fiction games, is now available for Steam, Android, and on iOS in the “Choice of Games” app.

Stop a deadly plague in a medieval fantasy tale of swords and surgery!

Mask of the Plague Doctor is a 410,000-word interactive novel by Peter Parrish, where your choices control the story. It’s entirely text-based, without graphics or sound effects, and fueled by the vast, unstoppable power of your imagination.

The town of Thornback Hollow is under quarantine. Its people are unable to sleep, tormented by a disease known as the Waking Death, and the infection is spreading. The Crown has commanded you and two other plague doctors to end the plague, even if that means destroying the town.

In your quest for knowledge, will you try to ease the fear and paranoia of the citizenry, or fan the flames of political unrest? Will your fellow plague doctors become your rivals, allies, or lovers? Will you grasp the true power that watches over the town?

• Play as male, female, or non-binary; gay, straight, bisexual, or aromantic.
• Select from a range of mask designs, or opt for one of your own.
• Specialize in surgery, medical theory, or uncanny mysticism.
• Unearth a cure for the Waking Death, apply traditional medicines, or explore more experimental methods.
• Respect the local deity, or throw your support behind a banished sect.
• Work with the Crown’s appointed mayor, aid a revolt, or do your best to avoid political intrigue altogether.
• Find time for romance with one of your fellow plague doctors, or a dashing mercenary.
• Recruit others to your medical cause and perhaps leave a lasting legacy.
• Seek induction into the Fellowship of Royal Physicians, or be happy just to escape with your life.

Thornback Hollow is in peril. Can your healing hands soothe the Waking Death to slumber? Or will the town perish to fire and disease?

We hope you enjoy playing Mask of the Plague Doctor. We encourage you to tell your friends about it, and recommend the game on Facebook, Twitter, Tumblr, and other sites. Don’t forget: our initial download rate determines our ranking on the App Store. The more times you download in the first week, the better our games will rank.