Light Years Apart–Outfox a galaxy-spanning AI to save your planet! 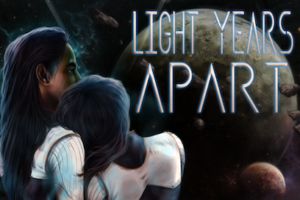 We’re proud to announce that Light Years Apart, the latest in our popular “Choice of Games” line of multiple-choice interactive-fiction games, is now available for Steam, Android, and on iOS in the “Choice of Games” app.

Can you and your sister outfox a galaxy-spanning AI to save your home planet? A rollicking adventure with space pirates, spies, and snarky computers.

Light Years Apart is a 230,000-word interactive sci-fi novel by Anaea Lay, where your choices control the story. It’s entirely text-based—without graphics or sound effects—and fueled by the vast, unstoppable power of your imagination.

You trained at the Kempari College, an academy for super spies, fighting against the Aydan-machine interplanetary AI. Aydan-machine and its affiliated megacorp, the ICA, have monopolized control over FTL weft-drives.

You resigned from the College when your teachers ordered you to commit murder. Since then, you’ve wandered the galaxy for a decade, so long that your shipboard computer has become your surrogate parent.

But now, the ICA has blockaded Kempus, and you’re in a unique position to prevent thousands of unnecessary deaths. Will you ally with the enemy, or return to the rebels who once betrayed you?

What’s more, your hacker sister has brought your old flame back into your orbit, and the love you left behind is now mission-critical. As a former spy, you have flexible morals, but there are certain lines you won’t cross. The blockade is real, and it’s killing kids.

When your planet needs you, will you step up or storm off?

• Play as male, female, or non-binary; gay, straight, bi, poly or asexual
• Unleash artful and infinite swearing
• Swap stories and strategies with your secret agent peers
• Drink yourself silly on extraterrestrial moonshine
• Team up with space pirates
• Watch a planet breed with its moon
• Smuggle two weird teenagers past an interplanetary blockade

We hope you enjoy playing Light Years Apart. We encourage you to tell your friends about it, and recommend the game on Facebook, Twitter, Tumblr, and other sites. Don’t forget: our initial download rate determines our ranking on the App Store. The more times you download in the first week, the better our games will rank.