Fox Spirit: A Two-Tailed Adventure—Dazzle humanity or destroy it as a magic fox! 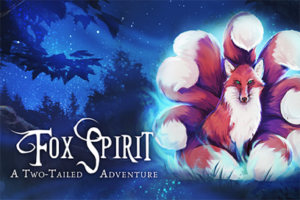 We’re proud to announce that Fox Spirit: A Two-Tailed Adventure, the latest in our popular “Choice of Games” line of multiple-choice interactive-fiction games, is now available for Steam, Android, and on iOS in the “Choice of Games” app. It’s 33% off until October 22nd!

Dazzle humanity or destroy it as a magical, two-tailed fox!

Fox Spirit: A Two-Tailed Adventure is a 250,000-word interactive fantasy novel by Amy Clare Fontaine, where your choices control the story. It’s entirely text-based, without graphics or sound effects, and fueled by the vast, unstoppable power of your imagination.

Seek the mystical Star Ball that will grant you immortality. It is hidden somewhere in Hoshimori, the human village where your family was killed.

Weave illusions, shapeshift, or control minds! Will you become a benevolent guardian, a playful trickster, or a fierce demon? Avenge your family or strive to change their killer’s heart? Beguile a human love interest or woo a vulpine mate?

One way or another, you’ll set the world on fire!

We hope you enjoy playing Fox Spirit: A Two-Tailed Adventure. We encourage you to tell your friends about it, and recommend the game on Facebook, Twitter, Tumblr, and other sites. Don’t forget: our initial download rate determines our ranking on the App Store. The more times you download in the first week, the better our games will rank.