Fate of the Storm Gods—Control the elements as a force of nature! 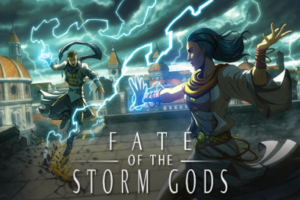 We’re proud to announce that Fate of the Storm Gods, the latest in our popular “Choice of Games” line of multiple-choice interactive-fiction games, is now available for Steam, Android, and on iOS in the “Choice of Games” app. It’s 33% off until February 4th! You can also pick up Bendi Barrett’s first game, Avatar of the Wolf for 25% off!

Harness wind, earth, fire, and all the forces of nature to destroy your enemies! Will you stabilize the broken magic of the weather, or revel in its chaos?

Fate of the Storm Gods is a 275,000-word interactive fantasy novel by Bendi Barrett. It’s entirely text-based, without graphics or sound effects, and fueled by the vast, unstoppable power of your imagination.

The world-below is the realm of humans: mundane, short-lived, often helpless creatures. But you are a Weather Builder—a resident of the upper-world, controller of all things atmospheric and a veritable Storm God! In your Workshop of the Westerly Wind at the peak of Mount Gion, you and the Master Builder regulate the weather in the Western lands.

When a desperate human royal climbs Mount Gion and breaches your workshop, you learn that the weather in the Southern lands has descended into chaos. Floods destroy whole cities in high-lying areas. Fertile plains deteriorate into desert within months. Furthermore, the Builders’ loyal automaton servants, the homunculi, are slaughtering humans without provocation.

This must be the work of the Weather Eaters, enemies of the Builders since time immemorial. The Weather Eaters feed off of maladaptive weather, sowing anarchy and strife wherever they can. Now, your ancient feud threatens to break the weather and tear apart two worlds.

Armed with a suite of elemental powers and the aid of your trusty (and deadly) homunculus, you must leave Mount Gion for the first time, putting yourself between the will of the Builders, the needs of the humans, and the ire of your enemies. Will you use your elemental powers and your wits to mend this rift before it’s too late, or will you prioritize accumulating power and influence in the midst of growing chaos?

• Play as male, female, or nonbinary; gay, straight, bi, asexual, or poly.
• Ascend to the highest level of skill in the weather-building arts and become a Weather Master.
• Pursue romance with a stalwart royal, a criminal mastermind, a devout Weather Builder, or a villainous Weather Eater!
• Negotiate peace between warring factions or crush your foes under your thumb.
• Discover the secrets of the broken weather system and the complexities of bringing order to it.
• Decide the future of one of the last remaining human strongholds.
• Help guide the growth of your loyal homunculus companion, Humil, as they learn what it means to think for themselves.

The fate of two worlds is in your hands!

We hope you enjoy playing Fate of the Storm Gods. We encourage you to tell your friends about it, and recommend the game on Facebook, Twitter, Tumblr, and other sites. Don’t forget: our initial download rate determines our ranking on the App Store. The more times you download in the first week, the better our games will rank.