Two New Hosted Games! “Relics of the Lost Age” and “The Brothers War“

Relics of the Lost Age by James Shaw

The Nazis are on the trail of six ancient magical artifacts powerful enough to crush all opposition and conquer the world. But they didn’t take one thing into account: you.

Relics of the Lost Age is a swashbuckling 350,000 word interactive adventure novel written by James Shaw, where your choices control the story. It’s entirely text-based, without graphics or sound effects, and fueled by the vast, unstoppable power of your imagination.

It started out as a routine dig in Palestine. But soon you find yourself racing across the desert on a quest to track down a fabled ancient relic before the Nazis can get their hands on it. And that’s just the beginning. The Third Reich are mobilizing right across the globe, on the hunt for mysterious ancient Relics of Power, objects which could put unimaginable supernatural forces into the hands of the armies of darkness. And the only thing standing in their way is you.

Step into the weathered boots of a swashbuckling 1930s archaeologist and strap in for a wild ride around the globe, finding adventure, romance, and mystery at every turn. Do you have what it takes to locate the Relics, vanquish your foes and save the world from a thousand years of darkness?

Clans of Éire: The Brothers’ War by Fionn Graham 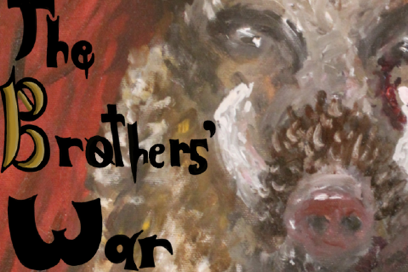 In pre-Christian Ireland, where family bonds and the honour of one’s tribe are worth dying for, and where the old gods are forever watching, you must be as guarded as the hound, as cunning as the fox, or as brutal as the boar to survive. You have fallen out of your father’s favor and are being sent along with a dispatch of hardened warriors to help your uncle quell the ever-frequent viking raids to the east. You must impress your father to reinstate your right to the throne of the Boar Clan… or you can seize it for yourself. Your father’s numerous enemies are conspiring against him, the peasants are rising in revolt, his own guard outposts are deserting him and even his most trusted may be tempted to rip his throne from under him.

The Brothers’ War, a Clans of Éire Saga, is a 60,000 word historical-fantasy interactive fiction written by Fionn Graham, where your choices and decisions control the world around you, including characters you meet, your possible romances as well as the enemies you make. It is text-based without sound or special effects, supported by occasional celtic la-Tène style art and fuelled by the vast, unstoppable power of your imagination. The people of Éire whisper of a time when your father’s time on land has ended, and when, or whether, you will take his place. Through politics, persuasion, battles and knowledge, you must secure your future throne… or die trying.

As your father’s influence trickles through his fingers, which side shall you choose?

James and Fionn developed their games using ChoiceScript, a simple programming language for writing multiple-choice interactive novels like these. Writing games with ChoiceScript is easy and fun, even for authors with no programming experience. Write your own game and Hosted Games will publish it for you, giving you a share of the revenue your game produces.