Vampire: The Masquerade — Out for Blood—Hunt the vampires that terrorize your town! 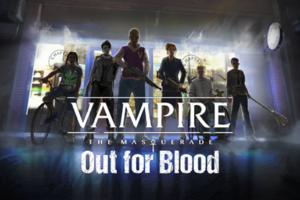 We’re proud to announce that Vampire: The Masquerade — Out for Blood, the latest in our popular “Choice of Games” line of multiple-choice interactive-fiction games, is now available for Steam, Android, and on iOS in the “Choice of Games” app.

Gather your allies to hunt the vampires that terrorize your town! Study their ways and exploit their rivalries, or you’ll become a vampire yourself.

Vampire: The Masquerade — Out for Blood is a 455,000-word interactive horror novel by Jim Dattilo, based on “Vampire: The Masquerade” and set in the World of Darkness shared story universe. Your choices control the story. It’s entirely text-based, without graphics or sound effects, and fueled by the vast, unstoppable power of your imagination.

You’ve barely settled into your new home of Jericho Heights on the outskirts of Chicago, before discovering that vampires live in town. You’re struggling to start a new life, meet new people, and maybe even find love. But when your neighbors start disappearing, you’re forced to take action.

Take on the role of a vampire hunter to save your town from the influence of Chastain, a vampire more than a century old. When a group of young thin-blood vampires start a war with Chastain, will you choose sides, or hunt them all?

Gather your forces and sharpen your stake to take back the night!

• Play as male, female, or nonbinary; gay, straight, or bi.
• Choose from classic VtM attributes and skills to build out your character.
• Enjoy 17 character portraits.
• Meet an ensemble cast of dynamic characters each with their own skills.
• Romance other characters, either human or vampire.
• Hunt vampires, study their ways, or try to be Embraced.

We hope you enjoy playing Vampire: The Masquerade — Out for Blood. We encourage you to tell your friends about it, and recommend the game on Facebook, Twitter, Tumblr, and other sites. Don’t forget: our initial download rate determines our ranking on the App Store. The more times you download in the first week, the better our games will rank.