Battlemage: Magic by Mail—Defend your kingdom with forbidden magic! 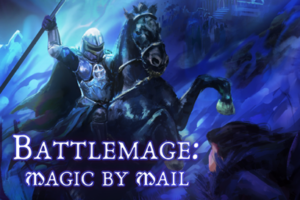 We’re proud to announce that Battlemage: Magic by Mail, the latest in our popular “Choice of Games” line of multiple-choice interactive-fiction games, is now available for Steam, Android, and on iOS in the “Choice of Games” app.

Will you defend your kingdom with forbidden magic, or backstab the crown? Win tournaments, kiss a prince or princess, or just seize power for yourself!

Battlemage: Magic by Mail is a 168,000-word interactive novel by Nic Barkdull. It’s entirely text-based, without graphics or sound effects, and fueled by the vast, unstoppable power of your imagination.

You’re lucky you saw that ad at the market. “Learn from home! Full battlemage qualification by mail!” it said. Now, your first battlemage assignment is finally here! At last, you can master the magical arts of elementalism, illusion, healing, and necromancy.

Yesterday you were just a squire, but today you’re an aspiring battlemage! But Sir Kelton says that squires aren’t allowed to practice magic, so you’ll need to act like you actually want to be a knight, at least for now.

With the powers you can unlock, maybe you can win a tournament or two, or get in good with the royal family—you can even try your hand at the game of court politics. Or if you really want to get on Kelton’s good side, prove yourself on the battlefield, defeating the mysterious invaders that threaten your kingdom’s borders.

But beware, if you’re not careful, you’ll suffer from Arcane Corruption. At first, Corruption warps your physical appearance, but it soon takes over, putting the magic in control.

You won’t let that happen, will you?

• Play as male, female, or nonbinary; gay, straight, bi, asexual, or poly.
• Manipulate minds with illusion magic, master the elements, channel the forces of life with healing magic, or harness death with necromancy.
• Compete in tournament events like combat, archery, and jousting.
• Navigate the royal court and use intrigue and betrayal to gain power.
• Defend your kingdom from mysterious invaders led by a powerful battlemage.
• Compete with other students to gain the notice of the legendary El Cano.
• Romance a fellow squire, a humble stableboy, a prince, or a princess.

Will you be a loyal squire, a powerful battlemage, or ruler of the realm?

We hope you enjoy playing Battlemage: Magic by Mail. We encourage you to tell your friends about it, and recommend the game on Facebook, Twitter, Tumblr, and other sites. Don’t forget: our initial download rate determines our ranking on the App Store. The more times you download in the first week, the better our games will rank.