Two New Hosted Games! Raiders of the Icepeak Mountains by Adrao and Temple of Endless Night by Dariel Ivalyen

Raiders of the Icepeak Mountains by Adrao 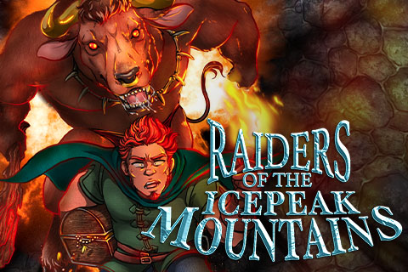 The orc tribes of Icepeak Mountains are threatening human settlements. Do you have the courage and determination to defeat their clans? Try to survive deadly dungeons and level up as an adventurer.

Raiders of the Icepeak Mountains is a 120,000 word interactive gamebook by Adrao, where a combination of your choices and the roll of dice will determine your destiny. The game is text-based, with artwork allowing you the chance to actually see the exotic locations and dungeons you will visit on your journey.

You will start as a novice adventurer, either a fighter, cleric, wizard or rogue, and level up through a series of quests, either those related to the main story of the game, or other side adventures. The dungeons you will visit have some element of randomness to them, ensuring that even if you play multiple times you will still discover some new secret rooms and monsters. You will have to carefully choose between the abilities and spells at your disposal, and manage well the treasure you loot to buy a variety of objects that can help you in your quests. 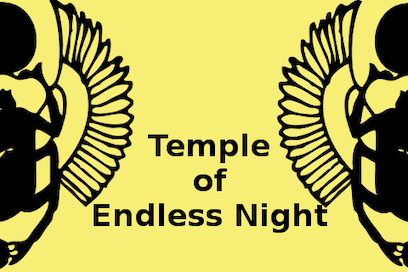 Use your voice to charm the people around you, or focus on the power of magic to destroy your enemies! Start a servant rebellion, or use poison to solve your problems! Do what your patron deity tells you to, or abandon their teachings! Stay loyal to the Pharaoh, or betray him and join the forces of darkness to change the face of Egypt forever!

Temple of Endless Night is a thrilling 200,000 word interactive fantasy novel by Dariel Ivalyen, where your choices fully control the story. It’s entirely text-based—without graphics or sound effects—and fueled by the vast, unstoppable power of your imagination.

When a strange man stops you on the streets of your hometown and sends you to an ancient temple that no one seems to know anything about, you grow both curious and worried. As the caravan gets closer to the mysterious place, you realize that the world around you isn’t exactly what it seems. You see things that are not there, and you can tell something is deeply wrong. Something is trying to influence your mind.

When you find yourself surrounded by nightmares and illusions, will you use the light to cast them out, or will you help them become reality?

Will you serve the light, or give in to darkness?

Adrao and Dariel developed their games using ChoiceScript, a simple programming language for writing multiple-choice interactive novels like these. Writing games with ChoiceScript is easy and fun, even for authors with no programming experience. Write your own game and Hosted Games will publish it for you, giving you a share of the revenue your game produces.