Faerie’s Bargain: The Price of Business—Amass a goblin hoard of treasure and wonders! 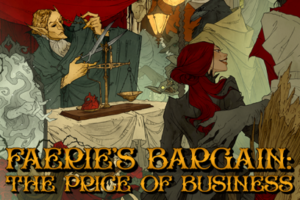 We’re proud to announce that Faerie’s Bargain: The Price of Business, the latest in our popular “Choice of Games” line of multiple-choice interactive-fiction games, is now available for Steam, Android, and on iOS in the “Choice of Games” app. It’s 33% off until December 9th!

Amass a goblin hoard of priceless treasures! Will you corner the market on memories and dreams? What will you pay for true love, and what is it worth?

Faerie’s Bargain: The Price of Business is a 300,000-word interactive fantasy novel by Trip Galey where your choices control the story. It’s entirely text-based—without graphics or sound effects—and fueled by the vast, unstoppable power of your imagination.

You are one of the goblin merchants in the Untermarkt: a magical bazaar beneath Victorian London that trades in memories, wishes, secrets, and more. The Untermarkt has been a mainstay of London Faerie life since High Queen Elizabeth first forged the Treaty with Titania, Queen of Faerie. As merchant, you are skilled in dealing in all manner of impossibilities: new faces and voices, silks spun of starlight, bottled time, twists of fate, and even stranger things. Here, anything can be bought and sold for the right price. Will you line your pockets, or are the rewards of your trade more valuable than money?

When a mysterious business opportunity takes you by surprise, you have the chance to deal in something new: political intrigue! High Queen Victoria sits upon the Throne, but there are many who would prefer to rule in her place. Who is plotting against her, and what will it take to stop them? And where has the princess gone? To find out, you will have to learn the deepest secrets of the most powerful people in the Untermarkt: noble knights, fabulously wealthy merchants, dispossessed royalty, and more. Will you defend the High Queen, or use your newfound wealth to fund a little revolution?

Your fellow merchants certainly won’t allow an opportunity for profit to slip away. Will you undercut their efforts at the Merchant Conclave, or ignore all the politicking in favor of growing your wealth? And then there’s love—which could come at a greater cost than you ever imagined. Whatever you decide, one thing is certain: It’s time to get down to business!

• Play as male, female, or nonbinary; gay, straight, bisexual, pansexual; asexual and/or aromantic.
• Play as mostly-human, mostly-faery, or an even balance between the two, and shift the levels between the two extremes as the story progresses.
• Buy yourself new eyes, skin, or a whole new body!
• Gain mystical power from your supernatural ally: Mirrors, Roses, or the Fog of London itself.
• Wear hair made of stormclouds, sing with the voice of a Siren, drink from a wineskin of luck, sell dragon scales and flowers from a glass mountain.
• Romance—or betray!—a socialite, a Lord, a Lady, maybe even your Supernatural Ally!
• Make deals with creatures both fae and mortal; trade in favors, memories, magic, bottled time, twists of fate, and more!
• Attend society balls and grand galas, investigate scheming nobles, and defend (or betray) the Empire from threats without and within!
• Rise to a seat on the High Council and rule the Untermarkt along with the highest of goblin and fae elite—or just build up enough wealth to dig yourself out of debt
• Advocate for the rights of children trapped in factories and labor contracts, or exploit their plight for your own gain.
• Play politics to bolster or break the relationship between the Empire and Faerie, to make your own fortune, or to put a puppet on the Throne!

We hope you enjoy playing Faerie’s Bargain: The Price of Business. We encourage you to tell your friends about it, and recommend the game on Facebook, Twitter, Tumblr, and other sites. Don’t forget: our initial download rate determines our ranking on the App Store. The more times you download in the first week, the better our games will rank.