New Hosted Game! Life of a Space Force Captain, plus Paradox Factor is now on Steam! 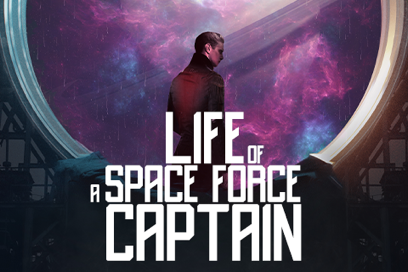 Have you ever wanted to be the captain of a faster-than-light starship? You will live a full life starting as a young child of the future.

Play as human, various species of alien, or even a robot. With the help of your friends and your loyal, upgradable robo-pet, you will go to school to learn skills of your own choosing before taking a position as a lowly cadet.

You’ll choose which department to join and rise within as the Solar System trembles in fear when a powerful foe threatens its very existence.
Will you master the psionic arts or use technology to enhance yourself with cybernetics? Will you follow the rules or will you do whatever is necessary? The choice is yours in Life of a Space Force Captain!

Life of a Space Force Captain author Mike Walter’s classic Hosted Game, Paradox Factor is back— and we’ve released it on Steam for the very first time! Now with new art and a new option to play as nonbinary, you can enjoy Paradox Factor for 50% off until May 12th!

Mike Walter developed these games using ChoiceScript, a simple programming language for writing multiple-choice interactive novels like these. Writing games with ChoiceScript is easy and fun, even for authors with no programming experience. Write your own game and Hosted Games will publish it for you, giving you a share of the revenue your game produces.