A Crown of Sorcery and Steel—Overthrow the queen’s clockwork iron army! 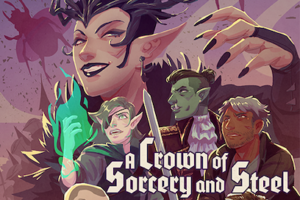 We’re proud to announce that A Crown of Sorcery and Steel, the latest in our popular “Choice of Games” line of multiple-choice interactive-fiction games, is now available for Steam, Android, and on iOS in the “Choice of Games” app.

Will you overthrow the queen and her clockwork iron army, or join her as a spy? The relics you recover from the elven dungeon will change the course of history!

A Crown of Sorcery and Steel is a 450,000-word interactive fantasy novel by Josh Labelle. It’s entirely text-based, without graphics or sound effects, and fueled by the vast, unstoppable power of your imagination.

For centuries, the kingdom of Kanda has been at war with Queen Nidana and her infernal clockwork machines. Each day, further reaches of the kingdom fall under her boot, overwhelmed by her enchanted army of iron constructs.

You’re an adventurer, caught in the middle of a war that began before you were born. Perhaps you’re an elf from the Sanctuaries to the west, which the queen’s machines long ago burned to the ground. Maybe you come from Ridgebank, one of the last human strongholds. Wherever you’re from, now you make your living helping people, plundering dungeons, or following the coin wherever it leads you.

It’s not long before you’re invited to join the resistance, recovering ancient elven artifacts from the sunken elven library. These artifacts could turn the tide of war, defeating the dark empress, or crushing the resistance. But will you lead the resistance to glory, or ally with the queen and snuff it out?

• Play as male, female, nonbinary; gay, straight, bi, asexual, or poly. Or choose among the genders of the elven, dwarven, and orc cultures.
• Explore the realm as a human, elf, dwarf, or orc, with four distinct backgrounds that change your adventure.
• Wield a sword, master magic, or disarm traps as you travel Kanda, a fantasy kingdom struggling against a brutal occupation.
• Battle side by side with a party of fighters, spellslingers, and rogues.
• Broker peace between the human cities and the dwarven mining colonies, or side with the dwarves and take control of the mountains.
• Delve lost ruins to uncover ancient elven artifacts, and restore the elves to their former glory… or sell the artifacts off to the highest bidders.
• Navigate palace intrigue in the orc empire, and decide who should take the throne.
• Turn against the resistance and become the queen’s best-loved spy to experience another side of the story.
• Romance a human resistance leader, an elven Scribe, a dwarven bard, an exiled orc prince, a halfling thief… or the dark queen herself.

Will you unite the realm and end the queen’s reign of terror, or rule by her side?

We hope you enjoy playing A Crown of Sorcery and Steel. We encourage you to tell your friends about it, and recommend the game on Facebook, Twitter, Tumblr, and other sites. Don’t forget: our initial download rate determines our ranking on the App Store. The more times you download in the first week, the better our games will rank.