Teahouse of the Gods—Harness the energy of qi to save the world! 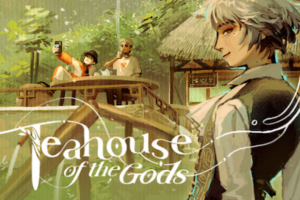 We’re proud to announce that Teahouse of the Gods, the latest in our popular “Choice of Games” line of multiple-choice interactive-fiction games, is now available for Steam, Android, and on iOS in the “Choice of Games” app.

Harness the energy of life itself to empower your body, control your environment, even delve deep into the mysteries of the mind! Will you use your newfound powers to maintain the balance of the universe, or will corruption stain your soul?

Teahouse of the Gods is a 250,000-word interactive novel by Naca Rat. It’s entirely text-based, without graphics or sound effects, and fueled by the vast, unstoppable power of your imagination.

After one night at “The Teahouse” on Mount Qingcheng in Sichuan, China, you wake with the ability to perceive and manipulate spiritual energy, known as qi. Now, you can see gods and monsters that ordinary people can’t, and you can unlock extraordinary powers.

Under the guidance of gods and animal spirits, you can perceive a sickness slowly poisoning the mountain and its inhabitants. When an ancient enemy returns to the mountain with vengeance in mind, will you be ready to join the fight? The mysteries of Mount Qingcheng are beckoning you.

• Play as male, female, or nonbinary; gay, straight, bi, asexual, or poly.
• Explore a mountain village in China that’s as timeless as myth, yet as modern as a trending hashtag on TikTok.
• Discover the secrets of your past life. Do they still have the power to shape your destiny?
• Rekindle an ancient romance, explore the possibilities with a long-lost friend, or charm a local mogul/memelord.
• Specialize in the body, mind, or environment path as you learn to control spiritual energy, or develop your skills in all three.
• Befriend a Romanian expat, a musical prodigy, a panda spirit, and a busy mother.
• Help a local resort owner plan a summer festival. (You’re here to learn the hospitality industry, remember?)
• Eat. Eat vegetarian, kosher, halal, or try everything: gourmet delicacies, spicy local fare, street food, and dishes from around the world …and beyond.

We hope you enjoy playing Teahouse of the Gods. We encourage you to tell your friends about it, and recommend the game on Facebook, Twitter, Tumblr, and other sites. Don’t forget: our initial download rate determines our ranking on the App Store. The more times you download in the first week, the better our games will rank.