Empyrean — Take down your father with his own secret airship! 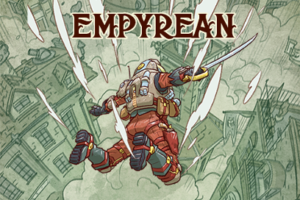 We’re proud to announce that Empyrean, the latest in our popular “Choice of Games” line of multiple-choice interactive-fiction games, is now available for Steam, iOS, and Android. It’s 33% off until December 8th!

Overthrow your father’s regime with his own secret experimental fighter plane! Dogfight dieselpunk aeros to save your city and the iron jungle beneath it.

Empyrean is an interactive “flying ace” novel by Kyle Marquis where your choices control the story. It’s entirely text-based–325,000 words, without graphics or sound effects–and fueled by the vast, unstoppable power of your imagination.

Far below the city of Actorius lies the mysterious world of the Deep Tech–creatures and plants both living and mechanical, and powered by unknown forces. Your father harvests the tech to create experimental airships, and the Revolution that fights his every move races to do the same. Your father’s aero, the Empyrean, is governed by Deep Tech dynamics not even he understands.

Only you can fly the Empyrean, match wits against ruthless oligarchs and devious spies, and take to the sky to fight your city’s enemies. But who is the enemy? The Revolution, or the government they say is corrupt? Foreign invaders, or the Deep Tech itself?

In a world of gleaming towers and downtrodden laborers, streaking aeros and deadly rooftop duels, when you risk it all, the sky’s the limit!

We hope you enjoy playing Empyrean. We encourage you to tell your friends about it, and recommend the game on StumbleUpon, Facebook, Twitter, and other sites. Don’t forget: our initial download rate determines our ranking on the App Store. The more times you download in the first week, the better our games will rank.