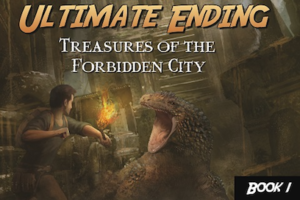 Three priceless star jewels. A century-old, cryptic journal. Using only the resources left by your grand-uncle, it’s up to you to find Atraharsis—the legendary lost city beneath the sands. But the way won’t be easy. Raging sandstorms, sinister traps, and a whole host of mysteries stand between you and your Ultimate goal.

Treasure of the Forgotten City is a 40,000 word interactive fantasy novel by Danny McAleese and David Kristoph, where your choices control the story. It’s entirely text-based—without graphics or sound effects—and fueled by the vast, unstoppable power of your imagination.

Can you solve the riddles and recover the fabled star gems in time? Or will you, like so many who’ve gone before, become the next permanent resident of the forgotten city?

• Filled with clever riddles and challenging puzzles.
• Hours of story-forging, problem-solving enjoyment.
• 49 possible achievements to unlock.
• Find clues, tips, and items that can help you in your quest.
• 26 unique conclusions based on your decisions.
• One ULTIMATE ENDING!

Danny McAleese and David Kristoph developed this game using ChoiceScript, a simple programming language for writing multiple-choice interactive novels like these. Writing games with ChoiceScript is easy and fun, even for authors with no programming experience. Write your own game and Hosted Games will publish it for you, giving you a share of the revenue your game produces.