Choice of Magics — Your magic can change the world, but at what cost? 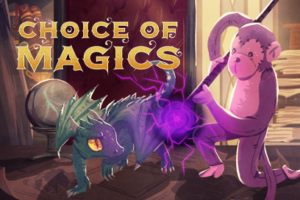 We’re proud to announce that Choice of Magics, the latest in our popular “Choice of Games” line of multiple-choice interactive-fiction games, is now available for Steam, Android, and on iOS in the Choice of Games Omnibus app. It’s 30% off until August 17th!

Your magic can change the world, but at what cost? Battle dragons, skyships, and evil Inquisitors, as you protect your homeland, conquer it, or destroy it forever.

Choice of Magics is a 550,000-word interactive, post-apocalyptic fantasy novel by Kevin Gold, author of our best-selling game, Choice of Robots. It’s entirely text-based, without graphics or sound effects, and fueled by the vast, unstoppable power of your imagination.

Thousands of years ago, the ancients destroyed civilization with five schools of magic. Each spell comes at a terrible price. Glamor charms your adversaries, rotting your body from the inside. Divination reveals faraway secrets, exposing your own secrets to others. Automation gives objects the spark of life, destabilizing the climate. Vivomancy can heal or change living things, with bizarre side effects. Blast your enemies with Negation energy, forming permanent clouds of deadly fallout.

As a young scrounger of antiquities, you hope to build your ruined world anew with these rediscovered spells. Now you must decide which of these magics can transform your post-apocalyptic society, and what you’ll risk to bring hope and light to your kinsmen.

• Play as male, female, or non-binary; straight, gay, bi, or ace.
• Design your own pet, hatch a baby dragon, and build your own golems.
• Win a war, win the crown, or win your best friend’s heart.
• Transform an evil Inquisitor into a talking tortoise, out for revenge. (Eventually.)
• Collect magic items: rings of power, an alchemy set, a “light sword” (wink, wink)
• Romance your village’s geeky mayor, a goofy swordfighter, or even the queen.
• Help a stuffed monkey to repaint all of the murals in the Cathedral dungeon.
• Test out the mayor’s new board game.

Can you bring the world back from ruin and shape a new society? Use your magics well, and you could become as a god; use your magics poorly and destroy the world all over again.

We hope you enjoy playing Choice of Magics. We encourage you to tell your friends about it, and recommend the game on Facebook, Twitter, Tumblr, and other sites. Don’t forget: our initial download rate determines our ranking on the App Store. The more times you download in the first week, the better our games will rank.