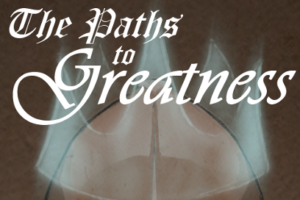 Your boring village life is interrupted one day when you are abducted and forced into the service of a mysterious and powerful Emperor and his army. Will you find friendship, love, or rebellion on this journey? It’s 33% off until February 22nd!

The Paths to Greatness is a 175,000 word interactive fantasy novel by Andrew Kenneth Specter, where your choices control the story. It’s entirely text-based—without graphics or sound effects—and fueled by the vast, unstoppable power of your imagination.

It’s up to you whether you defy the Emperor, or help him accomplish his goals, despite the devious plan he has in store for you.

• Play as a man or woman and be gay, straight, asexual, or aromantic.
• Romance your mentor, fellow apprentice, or the Emperor himself.
• Travel across a vast lake in order to stop an uprising.
• Participate in and win the fighting tournament, and then get ready for the ball.
• Take fate into your own hands with one of more than fifteen endings.

The path to greatness is waiting…

Andrew Kenneth Specter developed this game using ChoiceScript, a simple programming language for writing multiple-choice interactive novels like these. Writing games with ChoiceScript is easy and fun, even for authors with no programming experience. Write your own game and Hosted Games will publish it for you, giving you a share of the revenue your game produces.