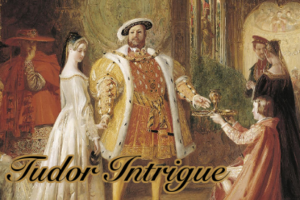 Enter the court of Henry VIII of England, and lead the country through the reformation. Politics, religion, love, and war in 16th Century England. It’s 33% off until February 22nd!

Tudor Intrigue is a 175,000 word interactive historical novel by James Young, where your choices control the story. It’s entirely text-based—without graphics or sound effects—and fueled by the vast, unstoppable power of your imagination.

• Play as a nobleman or noblewoman.
• Change the religion of England.
• Mary the King.
• Make alliances and maneuver in court.
• Take part in high stakes trials.
• Seize the Crown for yourself.

James Young developed this game using ChoiceScript, a simple programming language for writing multiple-choice interactive novels like these. Writing games with ChoiceScript is easy and fun, even for authors with no programming experience. Write your own game and Hosted Games will publish it for you, giving you a share of the revenue your game produces.