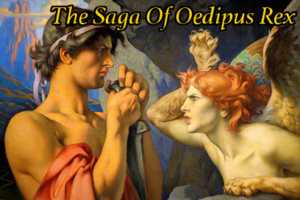 Your name is Oedipus, Prince of Corinth: And you’ve just discovered your future has been cursed by the gods themselves. Travel back to a time of magic and monsters in ancient Greece. Can you successfully fight to free yourself? Or will you succumb to the fate that was prophesied? It’s 25% off until May 24th!

The Saga of Oedipus Rex is an epic 100,000 word interactive fantasy novel by Jac Colvin, where your choices control the story. It’s entirely text-based—without graphics or sound effects—and fueled by the vast, unstoppable power of your imagination.

• Play as Prince Oedipus, heir to the rulership of Corinth.
• Test your wits against the Sphinx.
• Immerse yourself in ancient Greek life.
• Remain in the country of your birth, or travel afar to Egypt.
• Will you appeal to the gods, challenge their decisions, or let fate run its course?
• With 8 distinct endings: Will you follow the future that has been prophesied or find your own way?

Jac Colvin developed this game using ChoiceScript, a simple programming language for writing multiple-choice interactive novels like these. Writing games with ChoiceScript is easy and fun, even for authors with no programming experience. Write your own game and Hosted Games will publish it for you, giving you a share of the revenue your game produces.