Pon Para and the Great Southern Labyrinth — War against dark gods to save reality! 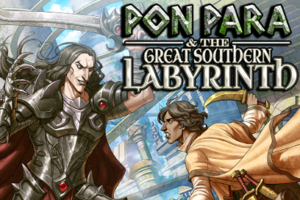 We’re proud to announce that Pon Para and the Great Southern Labyrinth, the latest in our popular “Choice of Games” line of multiple-choice interactive-fiction games, is now available for Steam, Android, and on iOS in the Choice of Games Omnibus app. It’s 30% off until May 16th!

Chosen by the gods, you must battle savage monsters, corrupt priests, and mad philosophers to save reality from the dark god of destruction!

Pon Para and the Great Southern Labyrinth is an interactive Bronze Age fantasy novel by Kyle Marquis, the first game in the Pon Para trilogy, where your choices control the story. It’s entirely text-based–430,000 words, without graphics or sound effects–and fueled by the vast, unstoppable power of your imagination.

Years ago, in the Behemoth War, the forces of evil tried to destroy the world with Raun, the dark axe of destruction. Your parents united with King Hyras to win the Behemoth War and save the kingdom, becoming legendary heroes.

You have been raised far from the intrigues and corruption of the great cities–and from the plots of the gods. But after twenty years of peace, the pirate king Lord Vankred has found Raun. Under the threat of war, the gods grant you their powers. You must find the mad King Hyras and defeat Vankred before he can assassinate the King and shatter the Three Nations.

But the gods have their own plans for you, and so does the secret master of the Great Southern Labyrinth.

• Play as male, female, or non-binary; gay, straight, bi, or ace.
• Defeat enemies with sword and spell, or make allies with diplomacy, deception, and the miracles of your god.
• Train your companions in alchemy, infiltration, diplomacy, or the arts of war
• Explore haunted forests, corrupt cities, and jungles littered with the remains of a fallen civilization.
• Find friendship, romance, or rivalry with an immortal nymph, a desert thief, or an ambitious monarch.
• Unlock secret magic techniques forgotten for centuries.
• Survive the wrath of the Emissary Beasts to open the labyrinth’s final door.

The labyrinth holds the key to untold mysteries. Once you know the truth, whose side will you take?

We hope you enjoy playing Pon Para and the Great Southern Labyrinth. We encourage you to tell your friends about it, and recommend the game on Facebook, Twitter, Tumblr, and other sites. Don’t forget: our initial download rate determines our ranking on the App Store. The more times you download in the first week, the better our games will rank.