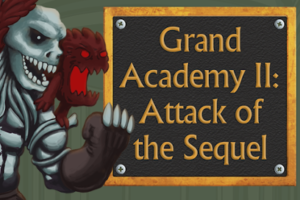 We’re proud to announce that Grand Academy II: Attack of the Sequel, the latest in our popular “Choice of Games” line of multiple-choice interactive-fiction games, is now available for Steam, Android, and on iOS in the Choice of Games Omnibus app. It’s 40% off until November 14th!

Congratulations! We are delighted to welcome you back to the Grand Academy for Future Villains, the world’s finest evil preparatory school. It’s sophomore year, and everyone’s back for a deliciously meta sequel.

Grand Academy II: Attack of the Sequel is a hilarious 215,000-word interactive novel and sequel to Grand Academy for Future Villains, by Katherine Nehring, where your choices control the story. It’s entirely text-based, without graphics or sound effects, and fueled by the vast, unstoppable power of your imagination.

In the space between worlds, between stories, beyond time and space itself, the Grand Academy for Future Villains trains the bad guys that every epic saga needs. Behold our dormitories, each befitting their narrative genre: horror, fantasy, sci-fi, or thriller.

This year holds terrifying new challenges: a roommate, a pet, and the ominous Board of Visitors and Overlords, who have come to review the Academy’s accreditation. Under the Board’s steely gaze, you may be eligible to receive a destiny, which every true villain craves. They have also set each genre against one another in the house tournament. Will you lead your house to victory, betray your comrades, or perhaps both?

And of course your “friends” are back, too. Aurion, Kinistra, Phil. Why, even your maleficent mother, Maedryn the Terror of Three Worlds, is here. Or shall I call her…Professor Maedryn?

• Play as male, female, or nonbinary (or unhuman), gay, straight, bi, or ace.

• Play the game as a standalone, or import a saved character from Grand Academy for Future Villains.

• As Science Fiction, Fantasy, Horror, and Thriller battle each other, use your genre-savvy to lead your genre to victory–or to seize a destiny for yourself. • Raise an illicit monstrous pet in your dorm room!

• As a TA, help your favorite professor get tenure–or sabotage their chances, and as the RA of Sci-Fi, Horror, Thriller, or Fantasy, figure out what’s best for your evil little charges.

• Acquire the metafictional tools you’ll need to win the game of genre against genre! What can you do with a plot-hole digger or a flashback gun?

• Defeat your nemesis! Or save them! Or smooch them!

And when things look bleak just remember: it’s a trap! But you should know. You set it.

We hope you enjoy playing Grand Academy II: Attack of the Sequel. We encourage you to tell your friends about it, and recommend the game on Facebook, Twitter, Tumblr, and other sites. Don’t forget: our initial download rate determines our ranking on the App Store. The more times you download in the first week, the better our games will rank.