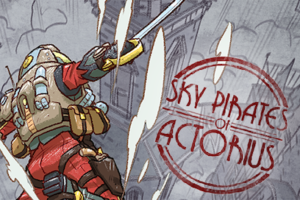 Infiltrate a pirate airship and foil the captain’s plans! Can you survive the greedy crew and ruthless officers and disrupt their schemes in time? You’ll hunt merchant vessels, and seek lost treasure while undercover as a sky pirate!

Escape to the skies above the world of Empyrean and command a brutal crew of pirates in search of plunder, glory, and high-tech booty!

Since this is a short short game, how about a short short interview?
This is a tie-in game for Empyrean. Tell me a little about how it came about.

The original plan was to make Sky Pirates a spoken-word Alexa game, but I always wanted to return to the world of Empyrean. I loved the “secret identity” element of Empyrean, and with a shorter game, I wanted to focus even more purely on that: in Sky Pirates, you’re infiltrating a criminal gang, and everything hinges on your ability to please the crew while hiding your identity from the pirate captain and keeping your superiors back home happy. It’s a delicate, high-tension balancing act.

What’s the challenge in writing short? I would have guessed that for you, it’s almost impossible, given the length of Empyrean, Silverworld, Pon Para.

Balancing brevity with clarity is hard, especially for an unfamiliar setting like in Sky Pirates. Everyone knows what a goblin is, or what a Corvette looks like, but what’s an “aero,” exactly? But I have a trick! It’s to let the text of the choices help players understand what’s possible. Even if the player doesn’t pick the option, “I want to see if I can look inside the captain’s cabin,” the player understands that this is a world where captains have cabins, and can use that to imagine what sort of story they’re in.

There’s really a certain kind of genius in writing short. That so mis-attributed that I have no ideas of its true origin quote “If I had more time, I’d write you a shorter letter.” I think you see it in games like Choice of the Dragon, which tips the scales at 33,000 words.

What’s next for you?

I can’t tell anyone! Right now I’m working on a secret urban fantasy project with a popular licensed property. I’m up to chapter 4 now and having a blast—I’ve never written a game set in the modern world before, and it’s a pleasure to write in my natural voice instead of shaping the prose around genre assumptions and the requirements of a faraway world.

But I do love faraway worlds, and fortunately I’m returning to the Three Nations soon in Pon Para and the Unconquerable Scorpion, the sequel to Pon Para and the Great Southern Labyrinth. That’s more than halfway done already. And if Sky Pirates does well, I’d like to write more mini-games in some of my other settings—maybe a murder mystery in the alt-history Byzantium of Silverworld, or a bard’s adventure in the Sublunar World of Tower Behind the Moon.