Blackstone Academy for the Magical Arts–Cast spells, pass exams, and save the world! 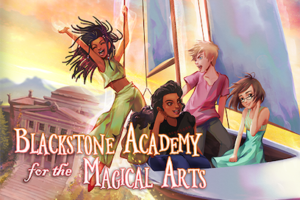 We’re proud to announce that Blackstone Academy for the Magical Arts, the latest in our popular “Choice of Games” line of multiple-choice interactive-fiction games, is now available for Steam, Android, and on iOS in the Choice of Games Omnibus app.

Cast spells, pass your exams, and save the world! Blackstone is more than a magic school: you’ll compete for glory in the sky sailing tourney, find love, and steer the fate of magic itself.

Blackstone Academy for the Magical Arts is a fast-paced 188,000-word interactive YA fantasy novel by Alana Joli Abbott, where your choices control the story. It’s entirely text-based, without graphics or sound effects, and fueled by the vast, unstoppable power of your imagination.

Blackstone Academy is a secretive magical high school for students with supernatural talents. When you discover you are a Sensor, someone who can feel the presence of magic, you learn that it’s exactly the type of place that will help you develop your ability. Your first year at Blackstone you’ll learn how to sky sail, practice your own magic spells, and discover the secrets the adults are hiding.

But as a magical crisis looms over campus, you must decide how you’ll get involved—and which factions you’ll support in guiding the future of the magical world. What will you prioritize: your academic career, your friends, or uncovering the magical threat? Will you keep the secrets of the magical world, or fight for a future without secrets, sharing magic with everyone?

The fate of magic is in your hands.

We hope you enjoy playing Blackstone Academy for the Magical Arts. We encourage you to tell your friends about it, and recommend the game on Facebook, Twitter, Tumblr, and other sites. Don’t forget: our initial download rate determines our ranking on the App Store. The more times you download in the first week, the better our games will rank.