Raise your litter of six baby werewolves while hunting for your true love! Dating a werewolf means you’ve been left with a litter of kids. Six kids. Kids who turn into cubs when they get upset. You’ve gotten the silver out of the house, and stocked meat in the fridge – but unlike their father, you can’t turn into a wolf to lay down the law! Never Date Werewolves is a 104,000-word interactive romance novel by Rebecca Zahabi. I sat down with Rebecca to talk about wolves and single parenthood, and the pleasures and pitfalls of writing.

Never Date Werewolves has to be one of my favorite game titles we’ve ever published. How did you come up with the concept for this story?

I was reading the comic book series Fables by Bill Willingham (which I highly recommend, by the way) and, at one point in the series, Bigby the werewolf has a litter of babies, and then proceeds to leave his girl (who isn’t a werewolf) with the babies to tend for. This sparked my imagination, and I wondered what was happening to her while she was trying to educate these children, and how I would deal with it if I was in that situation. I then went to read/watch stories with wolf children or badass parents dealing with babies, such as the animated film Wolf Children Ame and Yuki and the comics Saga, and I thought, there’s something really fun here which hasn’t been made into a game yet.

This is your first foray into interactive fiction, but you’re actually a multi-talented writer. Tell me a little about your other work.

I’m interested in exploring lots of different media – I wrote for theatre a lot, especially while I was still living in France, and founded a theatre company there. I also dabbled in oral storytelling and had a Youtube channel about Viking myths. I’ve always loved mythology and legends, where they come from and how they change depending on who’s telling them.

Most recently, I’ve been writing short stories for the Magazine of Fantasy and Science Fiction, I’ve done a translation for a middle-grade novel from French to English, and I’ve been working on an online comic with my sister. So I keep myself busy!My sister drew this little minicomic for me for Never Date Werewolves. 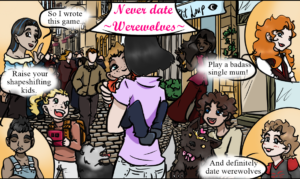 The PC in this game is a single mum. Did you bring your personal experience to writing this?

I’m afraid not – I’m not a mum, but I’ve looked after children, especially big groups for whom we performed children’s plays and organised activities after the show. And I just really like the idea of parents in fiction. In stories, we often see what happens before the couples meet, then it stops at “they lived happily ever after.” But I’m interested in what happens afterwards, behind the scenes. Did all the Beast’s children come with their own roses and shapeshifting tendencies? Being an immortal vampire is all very fun, but if you’re a teenage vampire, do you stay a teenager forever – with acne and mood swings to boot?

When I was small, I thought my dad was probably a secret werewolf. It’s easy to tap into those childhood memories and put them into a new setting, just teasing out the magical and seeing how it interacts with our everyday lives.

I love a game that mixes modern slice of life with something a bit unusual, like werewolves. What parts of werewolf mythology were brought to bear here?

I find werewolves have an interesting mythology, because they’re based in something we can all relate to – losing control of ourselves in a fit of anger – and because the stories have been around for so long they have lots of variants. There are stories with werewolves who have the fur on the inside, and if you cut them instead of blood it’s wolf fur that pours out. The versions of the werewolf story change across Europe, from the beautiful bride who turns into a monster, to the woman stealing her husband’s clothes so he can never resume his human life.

I wanted to play with these stories, but stay in areas readers would recognise, such as a link to the moon, a fear of silver, and the furious transformations which happen when your emotions overwhelm you, but which don’t necessarily make you a monster. I steered away from a purely “monster shape” and stuck with simply turning into a wolf, because I think there is more to explore with an animal shape with which you can hunt, and love, and make friends, rather than simply a raging beast.

Do you have a favorite Choice of Games or Heart’s Choice title that helped you in writing this?

My all time favourite Choice of Game title is Tally Ho by Kreg Segall. He really masters the genre, and the whole story fits the tone of the household drama in the 1930s, and does what I find interactive fiction does best – giving us a chance to be the main character of the books we love. I hope I’ve managed to pastiche the rom-com genre as well as Kreg Segall nails his.

Talking about urban fantasy, as I’ve said before, I love the meeting of the mundane and the magical in stories such as Neighbourhood Necromancer or the Psy High series – there’s a great potential for humour, I think, and because these games are doing something similar to what I’m trying to achieve, they’re a great source of inspiration.

I’ve got my début novel, The Game Weavers, coming out this fall 2020 – it’s very exciting and it’s taking up most of my attention at the moment. But I’m also looking forward to doing another game, now that I’ve got a clearer idea of how interactive fiction works and what I can achieve with it; I feel I’ll be more comfortable and in control with the next story I write, so I’ll be able to explore more avenues and hopefully create more fun content!