A Squire’s Tale–Outwit the faeries to rescue the prince! 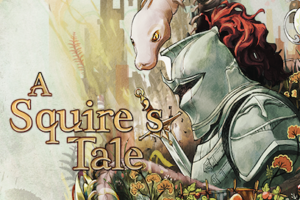 We’re proud to announce that A Squire’s Tale, the latest in our popular “Choice of Games” line of multiple-choice interactive-fiction games, is now available for Steam, Android, and on iOS in the “Choice of Games” app.

Battle evil faeries and traitors at court to rescue the prince of England! Can you resist the call of faerie long enough to complete your quest?

A Squire’s Tale is a 150,000-word interactive fantasy novel by Benjamin Appleby-Dean, where your choices control the story. It’s entirely text-based—without graphics or sound effects—and fueled by the vast, unstoppable power of your imagination.

The prince’s abduction has tipped the country toward civil war, and your Lady has been sent on a secret mission to recover him. Save the heir apparent, and you could finally earn your knighthood and leave your squiring days behind. But when your search leads you to a magical market in the middle of nowhere, your loyalties and your Lady are put to the test.

Will you join with the faeries, or deny their existence? Journey further from court and comfort, or seek to rationalize the impossibilities in front of you? As you hunt for clues and amass allies, you’ll master the knightly arts of music, combat, riding, and even falconry. Emerge victorious in the tournament, and you may even win a kiss. But stay focused on your quest—you’ll need all your skills to survive the tricks of Faerie and discover the truth behind the prince’s disappearance.

Do you trust the fair ones?

• Play as a male, female, or nonbinary squire.
• Romance a faerie, a squire, an alchemist, a dancer, or even your own Lady.
• Master the knightly arts of archery, chivalry, falconry, and more.
• Marvel at a world whose wonders depend on how much you believe.
• Battle in tournaments for glory, or duel after dark for blood.
• Uncover long-hidden family secrets.
• Visit a fourteenth-century abbey and ally with its prioress.
• Solve faerie riddles for future boons.
• Insult your enemies in rhyme!

We hope you enjoy playing A Squire’s Tale. We encourage you to tell your friends about it, and recommend the game on Facebook, Twitter, Tumblr, and other sites. Don’t forget: our initial download rate determines our ranking on the App Store. The more times you download in the first week, the better our games will rank.